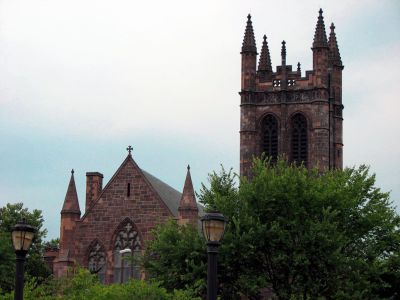 The church building, completed in 1898, was designed by architect Henry Vaughan. It is notable for its very fine Gothic architecture, and its central location near downtown New Haven makes it something of a landmark. Its stone tower is modeled on the tower of Magdalen College, Oxford. Vaughn personally chose the artists who created the beautiful interior. Bavarian-born Johannes Kirchmayer executed the intricate wood carving, notable in particular on the rood screen. The stained glass windows (including a large window at the back of the sanctuary above the baptismal font) were created by the noted firm of C.E. Kempe in London. The high altar also features monmunental stone figures and a carved Caen stone reredos inspired by examples in Winchester Cathedral and St. Alban's in England.
Image Courtesy of Wikimedia and Delcio GP Filho.
Sight description based on Wikipedia.