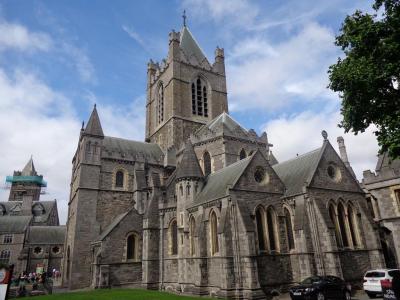 While in Dublin, you really should visit the Christ Church Cathedral which is the oldest medieval church in the city.

In the early 11th century the Norse-Gael King, Sitric Silkenbeard, went on a pilgrimage to Rome and, on his return, founded the cathedral overlooking the Viking settlement in Wood Quay. Originally wooden, it was rebuilt in stone in 1180. An extra nave and the Chapel of Saint Laurence O’Toole were added in the 13th century.

The church is somewhat unique in the fact that it is the seat of both the Roman Catholic Archbishop of Ireland and the Anglican Church of Ireland. While the cathedral remains in the church, the Archbishop uses St Mary’s Church and the cathedral is managed by the dean and chapter.

The crypt, dating back to 1172, is the largest in Ireland. It is also the earliest surviving structure in Dublin. It houses the oldest secular carvings and carved statues in the country. There is a 17th-century tabernacle and candelabras, and you can see 17th-century stocks that were once set up beside the church doors to publicly punish offenders. An unusual display in the crypt is the mummified remains of a cat and a rat found trapped behind the organ.

Inside the crypt, you can watch a short video on the history of the cathedral and visit the cathedral shop where you will find souvenirs and documents about the beginning of Christianity in Ireland. The cathedral cafe is also here; it serves sandwiches, a variety of cakes, scones and cream, as well as tea and coffee.

At the west end of the building, an ancient stone bridge leads to the former synod hall, which today is home to the Dublinia Exhibition of Medieval Dublin. The cathedral has 19 bells, the ringing of which is carried out by the Master of the Tower and the Ringing Master.

Why You Should Visit:
The crypt is outstanding and incredible, the belfry offers amazing views, the stories by the guides are excellent, and the architecture of the building is an art in itself!

Tip:
They have lovely lunchtime and evening concerts here, if you're lucky enough to catch one.