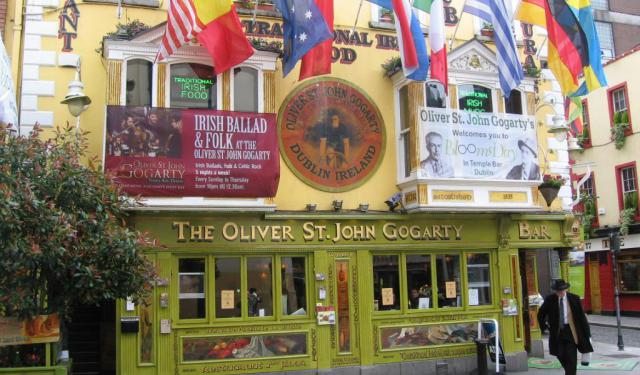 The three Ps of Dublin – the pub, the poet and the pint – have always distinguished the Irish capital as the home to some of the liveliest pubs in Europe. The public house is where writers traditionally sharpened their wit. Follow in the footsteps of James Joyce, Samuel Beckett, Brendan Behan and many other literary greats down the city’s charming lanes to experience Dublin’s love of literature and beer on this self-guided pub crawl.
Image Courtesy of Wikimedia and myself.
How it works: Download the app "GPSmyCity: Walks in 1K+ Cities" from iTunes App Store or Google Play to your mobile phone or tablet. The app turns your mobile device into a personal tour guide and its built-in GPS navigation functions guide you from one tour stop to next. The app works offline, so no data plan is needed when traveling abroad.

The first Mulligan's was established in Thomas Street, Dublin in 1782. The Mulligan family had moved their business to several different premises until finally leased the present building in Poolbeg Street in 1854.

The former Theatre Royal in Hawkins Street was near Mulligan's and the pub walls are decorated with associated posters, photographs, and showbills dating back to the early 19th century, as well as an autographed photograph of Judy Garland, who performed in the theatre and drank at the pub.

The pub is mentioned briefly in James Joyce's short story, Counterparts, and was used as a filming location on a number of occasions. Journalists and writers drank at Mulligan's during the 20th century, including staff from the Irish Times and from the former Irish Press newspaper – which operated next door until the collapse of the paper in 1995. A number of Dublin musicians also drank there, as several music industry management offices were in the nearby Corn Exchange Building.

Today, cultural pilgrims around the world continue coming to this pub where very little has changed for over a century.

Image Courtesy of Flickr and ohdarling.
Sight description based on Wikipedia.
2

Designed in late 19th century traditional Irish fashion – with flagstone floors and a healthy dollop of genuine artifacts throughout the interior, The Oliver St John Gogarty Bar is a definite must-see on your trip to Dublin. Named after famous Irish poet, playwright and surgeon, Oliver St John Gogarty, the pub is located in the heart of the capital’s Cultural Quarter, Temple Bar. Back in the day, apart from Gogarty himself, the place was frequented by a host of notable Irish authors, like James Joyce, Beckett and Behan, to all of which they now pay a due tribute here.

A cultural giant through such association, this pub is also a wonderful place for dining and having fun in general, especially, if you're keen on traditional Irish music which is on the second floor, while the current hits is on the ground level.

Ideally placed in the heart of Dublin, on historic Duke Street named after the second Duke of Grafton, this eponymously-titled, ancient watering hole has been treating Dubliners to liquid refreshments and sustenance since 1822.

Back in the 1890′s, the place underwent a costly Victorian renovation producing a facade that has survived pretty much intact to this day. Situated in close proximity to the commercial and literary life and the pulse of the city, the Duke has enjoyed a distinguished association with the literary grands of Ireland.

The likes of James Stephens, James Joyce, Oliver St. John Gogarty and Arthur Griffith breezed into the pub frequently at the turn of the 20th century, whenever they felt like having a quiet reflective jar.

In later years, the three great literary musketeers – Brendan Behan, Patrick Kavanagh and Myles Na gCopoleen (aka Flann O'Brien) – had a transitory romance with the place, although hardly ever at the same time, as they could barely stand each other's company for too long. Usually, the presence of one of them implied the absence of the other two.
Image Courtesy of Wikimedia and dronepicr.
4

Davy Byrne's pub was made famous by its appearance in Chapter 8 ('Lestrygonians') of James Joyce's 1922 modernist novel Ulysses, set on Thursday 16 June 1904. The main character, advertising canvasser Leopold Bloom, stops at around 1pm for a Gorgonzola cheese sandwich and a glass of burgundy while wandering through Dublin.

The pub has since become a pilgrimage point for fans of the novel, who, like Bloom, stop and have a cheese sandwich and a glass of wine. The pub is particularly popular on Bloomsday, an annual 16 June celebration of both, the book and James Joyce.

Joyce also mentioned the pub in the short story "Counterparts" in Dubliners as a bar visited by the office clerk protagonist, named Farrington, following an altercation with his senior at the office. It is also mentioned in Green Rushes, a short story collection by Maurice Walsh.
Image Courtesy of Wikimedia and DanMS.
Sight description based on Wikipedia.
5

This classic Irish pub on Harry Street is the one time haunt of the nation's literary giants of the 20th century: Patrick Kavanagh, Flann O'Brien, J.P. Donleavy, Liam O'Flaherty, Paddy Kavanagh and Brendan Behan. The latter was the pub's regular and would regularly entertain the crowd with his vast repertoire. He is also said to have based some of his characters in The Hostage and Borstal Boy on the publicans he met at McDaid's. According to Joycean scholars, McDaid's also provided setting for the opening of his story, Grace.

The place has quite an ambiance: a distinctive Victorian exterior and interior dimly lit, with a high ceiling and a smattering of chairs and tables. The moment you step inside, you may or may not find it hard to believe that this was once the City Morgue, later turned into a chapel for the Moravian Brethren, hence the high ceilings and the Gothic style windows.

Today, McDaid's is known more for its jazz and blues music sessions, which, combined with its literary past, makes for a truly unique cultural experience. Just as well, due to its close proximity to Grafton Street, whenever you feel exhausted from a huge spending marathon, you can always park yourself here for a soothing pint of “plain”, as Guinness is affectionately known. Otherwise, if consider having a party, the room upstairs will be just right. As with many popular pubs in Ireland, it is chock full on weekends, which is, however, hardly a deterrent for those wanting to soak up the atmosphere of old literary Dublin.
Image Courtesy of Flickr and WordRidden.
6

Located just a few minutes walk from Trinity College and St. Stephen's Green, Neary's pub is the UNESCO City of Literature Bar that has had some serious connections to the performing arts over the years, in large part due to its location, having its back entrance opposite the Gaiety Theatre stage door. The venue is named after Leo Neary, the pub's owner, who also happened to be the Honorary Consul of the Republic of Guatemala.

A firm favourite among actors, Neary's has also enjoyed just as much popularity with the literary folk. Of them, the most notable figure, undoubtedly, was one Brendan Behan, who spent many a night here in the 1950s.

Neary's represents a good example of late Victorian public house design, featuring a fine brick exterior, elegant cast iron arms holding up lamps at the main door, etc. Downstairs there is a main bar area, while upstairs is reserved for the lounge, known as Chatham Lounge. Unlike the majority of pubs in Dublin, this one doesn't have a TV or music, which is an advantage for those interested in a quiet evening of genuine conversation.
Image Courtesy of Wikimedia and Osama Shukir Muhammed Amin.
7

One of the oldest and most famous traditional pubs in Dublin, Toner’s has a reputation for its large beer garden where you can enjoy one of the best pints of Guinness in the city, but even more so for its strong literary ties. Back in the day, the place was famed as a haunt of James Joyce and Patrick Kavanagh, whose both images now adorn the pub’s sign.

Even W.B. Yeats, who was never one for pub culture, visited Toner’s from time to time for a quick drink, out of sheer curiosity, they say, just to see what attracted people so much. They also say that the snug was the only place he would drink, whenever he took an occasional tipple. Bram Stoker, in turn, was rather keen on the pub’s atmosphere and spent a great deal of time at Toner’s.

Original details of the interior – the old stock drawers behind the bar, dating from 1818, when Toner's first opened as a bar and grocery shop; the glazed cabinets filled with curio; elaborate mirrors; the brass bar taps and flagstone floors, to mention but a few – take visitors back in time, making one feel like stepping into a museum… The one in which you can drink!

Since opening its doors to the yard in 2012, Toner's has been a very popular spot with both locals and tourists alike. The beer garden is ideal for sunny days, as it gets the sun from morning until evening, and if it gets chilly, the heaters will keep you warm.
Image Courtesy of Wikimedia and Adam Bruderer.