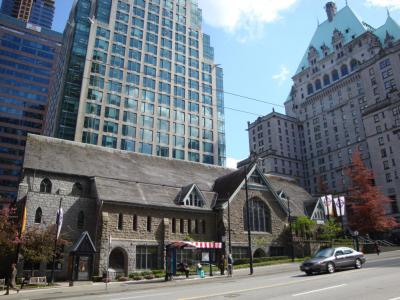 Christ Church Cathedral is one of Vancouver's heritage sites, and is the city's very first church.

It took a rather long time to make. The basement was constructed in 1889, but the cornerstone wasn't laid until 1894. The building shows a Gothic style constructed of stone, cedar, and fir, and features several complex and beautiful stained glass windows. In 1976, the lot that the church was located on was designated to be bulldozed so as to make way for a new skyscraper complex. Fortunately, lobbying by Vancouver's people saved the historic edifice, and gave it a place on Vancouver's list of heritage sites.

Christ Church Cathedral is adorned with very distinctive heraldic symbols. Its interior and exterior feature a Celtic cross design to show the Anglican church's British roots. The church's heraldry also features a whorl and three salmon in the artistic style employed by the native Salish people, one of the original inhabitants of Canada's west coast.

In addition to its historical look and beautiful stained glass, Christ Church Cathedral is also notable for being one of the churches in Canada to sanctify same sex unions. As of 2003, it officially blesses same sex marriages.
Image by Misterpartel on Wikimedia under Creative Commons License.
Sight description based on wikipedia