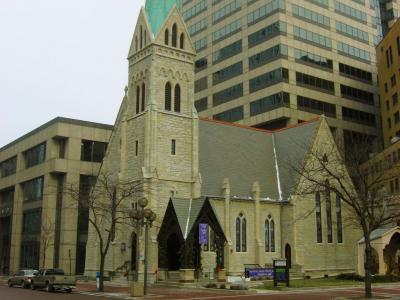 Christ Church Cathedral is the oldest religious building in continuous use in Indianapolis. It was founded in 1837. The present building was constructed in 1857 and is the oldest building on Monument Circle. It became the cathedral for the Diocese of Indianapolis in 1954. It is known for its Choir of Men and Boys and Girls' Choir, and for its pipe organs, one of which was donated by Ruth Lilly. The church was added to the National Register of Historic Places in 1973.

Due to Christ Church's central location in downtown Indianapolis, it became a hub of several charitable activities. During World War II and the Korean War it operated a canteen to feed and entertain thousands of military personnel. The parish is also the host of an annual strawberry festival. Christ Church parishioners held a strawberry festival as early as 1857 to raise funds for construction of the present-day church and held similar church benefits in 1863 and 1864, which marked the beginnings of the parish's successful annual fundraising event. Christ Church Cathedral has hosted a strawberry festival every summer since 1965, raising funds for local, national, and international charities.
Image Courtesy of Wikimedia and Nyttend.
Sight description based on Wikipedia.