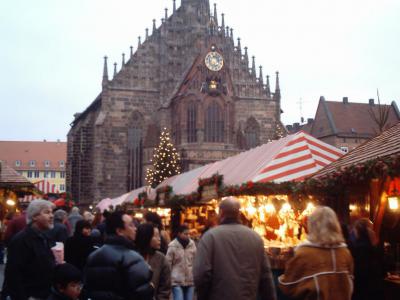 Christkindlesmarkt takes place during Advent in the Hauptmarkt, the central square in Nuremberg’s old town, and in adjoining squares and streets. With about two million visitors a year, it is one of the largest Christmas markets in Germany and one of the most famous in the world. Every year the Christmas market begins on the Friday preceding the first Sunday in Advent and ends on December 24, unless that day is a Sunday.

Historians assume that the market has its origins in traditional sales at the weekly market between 1610 and 1639 and that it gradually evolved into an independent market. Originally, the market opened on Thomas’ Day, December 4. Due to the large number of visitors, opening day was rescheduled to the Friday before the start of Advent in 1973 and has remained so ever since.

Tip:
In addition to the stalls where you can eat, drink and buy gifts, you will see a team of Clydesdale horses pulling a bright yellow stagecoach sponsored by the German Communications Museum. The inexpensive 10-minute ride around the market is and is available from 1 to 7pm daily.