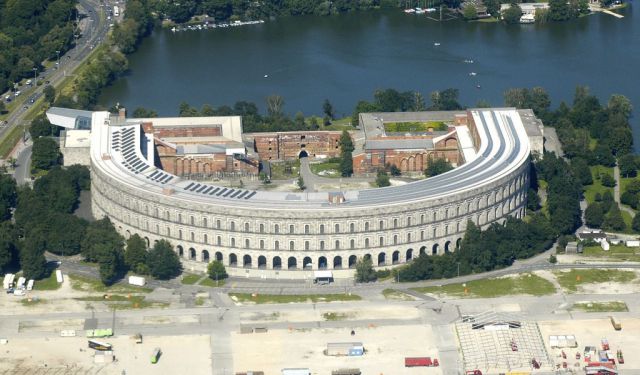 Despite Nuremberg's storybook appearance, the city's not so distant past is rather dark. Back in 1933, amid the rise of the Third Reich, the Nazis worked really hard to leave their stamp on the city, prettifying it and renovating the architecture in a bid to accommodate their massive rallies and bombastic military parades.

In fact, no other city in Germany is more intertwined with the Nazi legacy than Nuremberg. Adolf Hitler referred to it as the City of Party Rallies, considering it the standard for German cities. The majority of Nuremberg's Third Reich sites were designed by Fuhrer's favorite architect, Albert Speer.

Foremost among them is the monumental (24.5 hectares/11 square kilometers or 12 football fields in length) Reich Party Congress Grounds, built with prisoner labor and evoking ancient Roman architecture. Its three main structures include:

The Congress Hall – intended to serve as a congress center for the Nazi Party; twice the size of the Colosseum in Rome (50,000 seats);

The Great Road – the central axis of the rally grounds and a parade road for the German Wehrmacht, intended to link the Nazi ideology with the medieval grandeur of imperial Nuremberg; and

The Zeppelin Tribune – the fortified grandstand designed as an open air altar for Hitler, an evil demagogue as he was, to deliver his anti-Semitic stump speeches. The name "Zeppelinfeld" (Zeppelin Field) refers to the fact that, in August 1909, Ferdinand Graf von Zeppelin landed here one of his airships.

Nowadays, these and other former Nazi buildings serve as a reminder of the fall of the Third Reich, conserved – but not restored – for educational purposes.

If you're a WWII aficionado or history buff, take this self-guided walking tour to explore the sobering sites that once played a huge role in Nuremberg's recent history.
Image Courtesy of Wikimedia and Nicohofmann.
How it works: Download the app "GPSmyCity: Walks in 1K+ Cities" from iTunes App Store or Google Play to your mobile phone or tablet. The app turns your mobile device into a personal tour guide and its built-in GPS navigation functions guide you from one tour stop to next. The app works offline, so no data plan is needed when traveling abroad.

Nuremberg is a cultural icon with beautiful architecture and a long history of traditional crafts. However, it is infamous as the site of Nazi meetings.

The South Barracks is an austere building built with red brick and stone and was designed by Heinrich Himmler. The South Barracks housed the SS Signals School during WWII and was considered the most important barrack in the Third Reich. The facility was officially called accommodations and not referred to as barracks.

The main building had 1,000 rooms. The main entrance featured a large eagle, and the ceilings were decorated with mosaics. The ballroom features mosaics representing swastikas.

The facility also had many additional buildings. There was a kitchen building, a casino, garages, and horse stables.

2) Luitpold Arena and Hall of Honor

Originally, this area was home to a park built in 1906 to honor Luitpold, the Prince Regent of Bavaria. In 1933, Hitler used this area as a deployment area and parade ground. The park became known as the Luitpold Arena. Hilter constructed a crescent-shaped tribune and created a field over 84,000 square meters big.

Hitler organized rallies and parades here with as many as 150,000 participants, while 50,000 spectators looked on.

The Bluffahne, or Blood Flag was an important relic used during SA and SS deployments. The flag was allegedly soaked with the blood of a Beer Hall Putsch rebel, who had joined Hitler during the failed 1923 coup. During deployment ceremonies, SA and SS units were consecrated by touching their guidons to the Bluffahne.

In 1935, Nazi leaders announced the first two disastrous Nuremberg Laws from the Luitpold Hall, a building inside the Luitpold Arena. These laws deprived German Jews of their German citizenship. Luitpold Hall was destroyed by bombs in 1942 and not rebuilt.

Hall of Honor was built in 1930 before Hitler came to power. The hall features two rows of fire bowls on pedestals. The fire bowls have not been used since the Nazis in 1938.

Nuremberg was Hitler's choice location to hold massive rallies and parades. In 1935, construction began on Congress Hall and accompanying assembly grounds. Congress Hall's design was inspired by the Colosseum in Rome, and Hitler had envisioned it as the centerpiece of the Nazi party rally grounds.

Hitler had envisioned the Third Reich lasting for a thousand years and being a triumphant empire. The magnificence of this planned Congress Hall reflected his plans for a lasting empire.

The original plans called for the building to have a self-supporting roof and 50,000 seats. Congress Hall was originally planned to be 70 meters tall; however, it was abandoned when it reached half its intended height. It was designed in a U shape, with two head buildings located in the straight part of the U. Congress Hall features a granite panel facade.

Congress Hall was never completed, but it is the biggest preserved national socialist monumental building still in existence. The northern wing of the Congress Hall is now home to the Documentation Centre. The southern wing houses the Nuremberg Symphony Orchestra.
Image Courtesy of Wikimedia and Taxiarchos228.
4

The Great Road is almost 2 km (1.2 miles) long and 40 m (132 ft) wide. It was intended to be the central axis of the site and a parade road for the Wehrmacht. In its northwestern prolongation the road points towards Nuremberg Castle. This was to create a relation between the role of Nuremberg during the Third Reich and its role during medieval times. The road reached from the Congress Hall to the Märzfeld, the construction work started in 1935 and was finished in 1939 (it has never been used as a parade road, as due to the beginning of World War II, the last rally was held in 1938). The pavement was made of granite pavers in black and gray with edges of exactly 1.2 m (4 ft). A representative entrance portal and two pylons were planned at the northwestern end of the Great Road.

Near the entrance area of the German Stadium a grandstand with a hall of pillars was planned for the government leaders and generals which were to take the salute on Wehrmacht formations which were to march in direction of the parade ground Märzfeld. After the war, the road has been used as a temporary airfield for the US Army. Nowadays it is used by the nearby Nuremberg fair and exhibition company as an occasional parking area for highly frequented fairs.
Image Courtesy of Wikimedia and Vitold Muratov.
Sight description based on Wikipedia.
5

The Documentation Center is housed in the never completed Congress Hall. The entrance to the museum features a dramatic glass and steel passageway that is "speered" through the brick building.

The Documentation Center features exhibits housed in concrete and brick galleries. These galleries offer historic photographs the show the rise and fall of Hitler's Germany.

The exhibit Fascination and Terror describes the National Socialist dictatorship. The exhibit focuses on propaganda's role in normalizing and elevating Hitler and his extreme beliefs.

The exhibit also shows the Nuremberg Laws, which stripped Jews and other minorities of their rights and led to the Holocaust.

Visitors can view an exhibit that commemorates victims of Nazi Germany's concentration camps. Additional exhibits focus on the 12 Nuremberg Trials that took place between 1945-1946. The Nuremberg Trials were famous for holding National Socialist executives to account for their war crimes.

The Documentation Center's exhibits ask visitors to ponder how a civilized nation created and executed the horrors that Hitler perpetrated.

The Documentation Center also provides visitors with historical information about the Congress Hall and the parade grounds. In addition, visitors can walk on a suspended platform to get a panoramic view of Congress Hall.

The so-called Zeppelinfeld is the location for the infamous Nazi rallies of the late 1920s and 1930s. One of the few remaining parts of a vast complex intended as the spiritual home of the Nazi party, the rather battered remains nevertheless still give the feel for the scale of the events that are now etched into history.

Consisting of a large grandstand with a width of 360 meters (400 yards) and a smaller stand, Zeppelinfeld was one of Albert Speer's first works for the Nazi party and was based upon the Pergamon Altar. The grandstand is famous as the building that had the swastika blown from atop it in 1945, after Germany's fall in World War II.

Standing on the rostrum at which Hitler expounded his fascist political philosophy is frankly a rather ambivalent experience: on the one hand, it feels a place of tangible evil; on the other, the dilapidated ruins provide reassurance that such a regime was, and can be, overcome.

Tip:
If you go by yourself and not with a tour guide, please no Nazi salutes or Heil Hitlers or you could get arrested.
Image Courtesy of Wikimedia and Stefan Wagner.
Sight description based on Wikipedia.
7

Max-Morlock-Stadion opened in 1928. It was originally known as Städtisches Stadion and has changed names many times. It could originally hold 37,000 spectators. When it was built, it was known as the most beautiful stadium in the world. It has been known as the Max-Morlock-Stadion since 2017. Max Morlock was one of the football club's best players, and the name memorializes his contribution to outstanding playing.

Nazi started using the stadium to host rallies. The Hitler Youth used the stadium as a parade ground; they would gather and march here. The Nazi Sports Body organized one of its biggest events, the fourth Deutsche Kampfspiel in 1934.

The US Army used the stadium as a sporting field immediately after WWII.

The stadium has undergone several renovations over the years and has been modernized so all fans can see the best action. It is also occasionally used for large concerts.
Image Courtesy of Florian K..

The historical center of Nuremberg, Old Town (German: Altstadt) is easily differentiated from other parts of the city. Divided in two by the Pegnitz River, the district represents a complex architectural ensemble with a maze of historical lanes (e.g. Weissgerbergasse) packed with half-timber houses, linked by centuries-old bridges, such as Maxbrücke, and set against the picturesque backdrops of...  view more

The most "German" of all cities in Germany, Nuremberg has witnessed many historic events in its lifetime. Sadly, the first thing immediately associated with Nuremberg is the rise of the Third Reich, the Nazi rallies, and the postwar trials over the Nazi leaders. Indeed, the city was favored by Hitler, who planned to build here a grandiose architectural complex for his party.