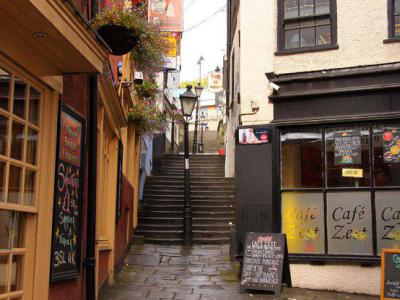 The street was originally called Queene Street after the 1574 visit of Queen Elizabeth 1st to Bristol. It became Christmas Steps in the mid 19th century. This was probably due to being next door to Christmas Street. An alternative less likely theory is that it is based on the nativity scene found in a stained glass window of The Chapel of the Three Kings of Cologne, which stands at the top of the steps.

In the 17th century, after 1669, the steps are also believed to have been called Lunsford's Stairs for a short period, in honor of a Cavalier officer Colonel Henry Lunsford who was shot through the heart in the street during the first siege of Bristol in 1643 during the English Civil War.

The steep-slanted steps were constructed in September 1669 and were paid for by wealthy wine merchant, Jonathan Blackwell. The street features an abundance of unique shops, galleries, potteries, makers of dresses and shoes, musical instruments, sweet shops, restaurants and much more. The song "Christmas Steps" by Mogwai is named after the street.
Image by Steve Daniels on Wikimedia under Creative Commons License.
Sight description based on wikipedia