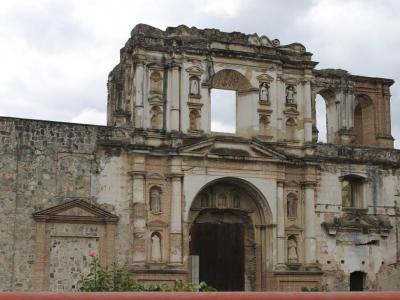 Church and School of the Society of Jesus (ruins), Antigua

Just like many of Antigua's temples, the Church of the Society of Jesus was founded after a Jesuit petition was made to build a school here in 1561, given that education was the primary goal of the Society. The permission was granted and work began, paving the way, about 50 years later, for both a school and temple. Saint Luke was well respected by the Society of Jesus and therefore the school was named after him.

In 1653, the San Lucas School had a staff of only thirteen priests, a very small number compared to the size of the building; the Jesuits, however, made a major impact on the cultural and educational life in the Capitanía General of Guatemala. The school was the city's most prestigious and from it graduated most of the elite members of society of the time. Most of its students were secular and went on to get the best positions in the country after graduating from the Royal and Pontifical University of San Carlos.

On September 29, 1717, the San Miguel earthquake struck the city and destroyed the San Lucas School building; however, the Jesuits had rebuilt the structure three years later. Later on, the complex hosted a Guatemalan handcraft product market until 1992, when the International Cooperation Agency for Development from Spain committed to restoring the school building in exchange of being able to use it to create an international educational center, with the blessing of the National Council for Antigua Guatemala Protection.
Image Courtesy of Free for commercial use No attribution required.