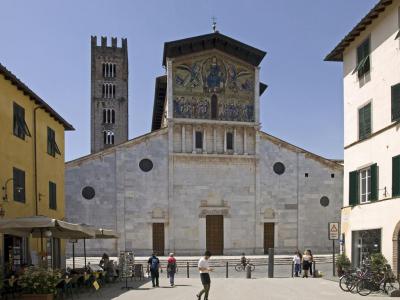 The Basilica of San Frediano is a Romanesque church in Lucca, situated on the Piazza San Frediano. Inside, the basilica is built in richly carved white marble. It consists of a nave and two aisles with arches supported by columns with Roman and Romanesque capitals. The Roman capitals were recycled from the nearby Roman amphitheatre. The highlight at the entrance is the huge 12th century Romanesque baptismal font. It is composed of a bowl, covered with a tempietto, resting on pillars, inside a circular basin. It is the craftmanship of master Roberto (his signature is on the basin) and two unknown masters. The basin is decorated with The Story of Moses by a Lombard sculptor. Master Roberto did the last two panels The Good Shepherd and the Six Prophets.

The remains of St. Frediano lie underneath the main altar from the 16th century. A massive stone monolith stands left of the main altar. This was probably pilfered from the amphiteatre of Lucca. But local tradition has it that it was miraculously transported to Lucca by San Frediano and used as a predella (step of an altar) for the first altar.
Image by Georges Jansoone on Wikimedia under Creative Commons License.
Sight description based on wikipedia