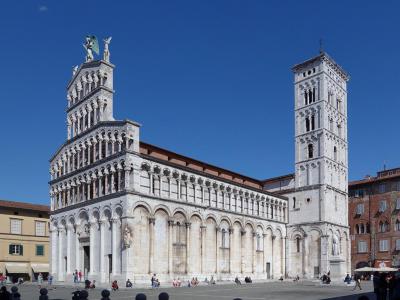 Notable is the façade, from the 13th century, with a large series of sculptures and inlays, numerous of which remade in the 19th century. On the summit, flanked by two other angels, is the 4-meter tall statue of St. Michael the Archangel. According to a legend, an angel's finger would have a huge diamond. On the lower right corner of the façade is a statue (1480) of the Madonna salutis portus, sculpted to celebrate the end of the 1476 plague. The church interior has a nave and two aisles with transept and semicircular apse; the nave is supported by arcades on monolithic columns. From the southern transept rises the bell tower, built in the 12th-14th centuries, with a series of single, double and triple mullioned windows.
Image by Tohma on Wikimedia under Creative Commons License.
Sight description based on wikipedia