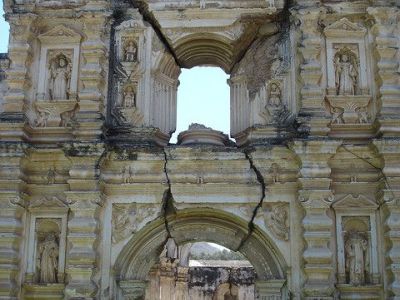 The church complex of Santa Rosa was built in 1570 for a sisterhood known for their white clothing. Today, the building is infamous for two cracks running through the main part of the building, which tell a devastating story of the monstrous earthquakes that ravished the region in the 18th century. Although the church's domes collapsed long time ago, its facade still has the image of Santa Rosa de Lima, crowned with roses and carrying baby Jesus in her arms, as well as figures of several Dominican saints: Santo Domingo, San Francisco, and San Vicente Ferrer.
Image Courtesy of Flickr and Moon.of.Paper's.