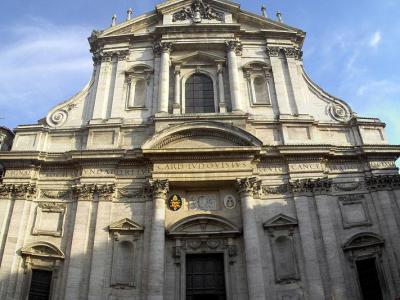 Dedicated to St. Ignatius of Loyola, founder of the Society of Jesus (commonly known as Jesuits Order), this 17th-century Baroque church was inspired by the Church of Gesù in Rome, built in the late 16th century.

The inner layout of the church is a common "Latin Cross" with the main section and side-chapels elaborately decorated. Because of the lack of funds to build a dome, a painter was hired to create an optical illusion thereof here. Pursuant to that, all the ceilings had been painted with an ingenious technique producing a visual perspective that virtually pushes physical boundaries outward. As a result, one can hardly imagine that the paintings above are actually flat. Standing in the circle marking the center of the main floor will allow appreciating this effect in its entirety. The elaborate painting on the main ceiling, depicting entry of St. Ignatius into Paradise, is sure to give one a stiff neck gaping at it. To avoid this, a large mirror is placed on the floor.

The other eye-grabbers here are a huge stucco statue of St. Ignatius, as well as the colored marbles, extensive gilding, and richly ornamented altars. The church is free to enter and is usually quiet. It overlooks the eponymous Loyola square, one of the nicest in Rome, which is also an attraction in its own right.