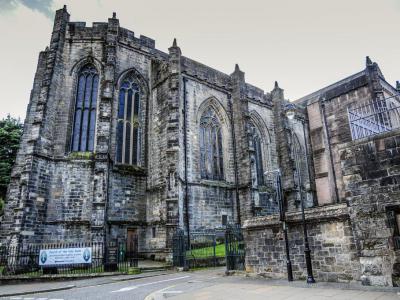 Church of the Holy Rude, Stirling (must see)

The Church of the Holy Rude is the second oldest building in Stirling. It was founded in 1129 during the reign of David I (1124 - 1153) as the parish church of Stirling. Nothing of the original structure now remains due to a fire. Construction on the new nave was underway by 1414, and based on the heraldry the vault of the nave was completed between 1440 and 1480. Work on the chancel did not commence until 1507 and completed around 1530 which was when the west tower was also extended to its current height.

King James VI was crowned King of Scots on 29 July 1567; John Knox performed the ceremony. This makes the Church of the Holy Rude and Westminster Abbey the only churches in Britain still in use to this day that have been the sites of coronations.
Image by pasto on Flickr under Creative Commons License.
Sight description based on wikipedia