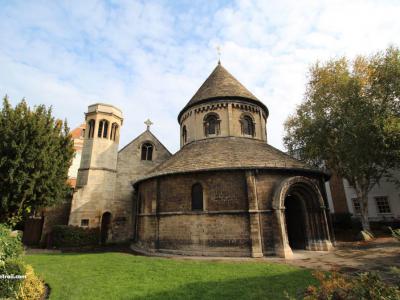 Church of the Holy Sepulchre, Cambridge

The Church of the Holy Sepulchre is found on Bridge Street in Cambridge city centre. One of the city’s oldest buildings, it has been in place since 1130. Known locally as The Round Church, it was designed in tribute to the rotunda at the Holy Sepulchre church in Jerusalem. The church has been extended and restored several times from its original structure, when it served as a chapel for wayfarers along Bridge Street, a former Roman Road which led out of the city. The glass in the east window was destroyed by a German bomb in World War II and subsequently replaced.

In 1994, the small Grade I listed church was ruled unsuitable to house its growing congregation, and is no longer used as a place of worship. Christian Heritage have reopened the church as a museum, featuring an exhibition on the history and impact of Christianity in England. The redundant church also houses a library of theological texts, and offers a range of courses and lectures on the Christian faith. The museum also offers guided tours of places of worship and other significant buildings in the city. These start from the Round Church on Sundays at 2.30pm and Wednesdays at 11.00am.
Image Courtesy of Flickr and thetempletrail.