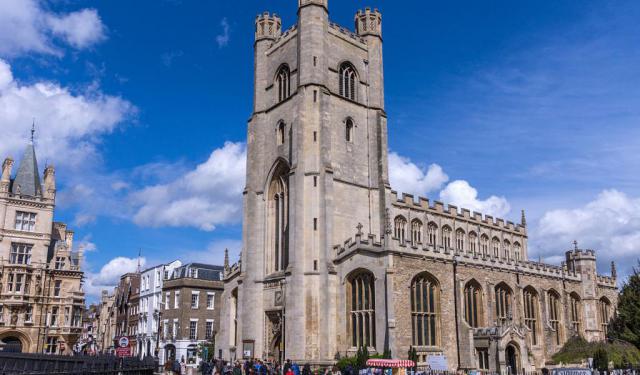 Image by Jean-Christophe BENOIST on Wikimedia under Creative Commons License.

Other than being associated with the world renowned university, Cambridge is also steeped in religious history. There are quite a few places of worship in the city, dating back hundreds of years, some even preceding the emergence of Anglican Church. If you are keen on the history of Christianity in Europe, follow this self-guided walk along the streets of Cambridge to discover some of the city's most famous churches and chapels!
How it works: Download the app "GPSmyCity: Walks in 1K+ Cities" from iTunes App Store or Google Play to your mobile phone or tablet. The app turns your mobile device into a personal tour guide and its built-in GPS navigation functions guide you from one tour stop to next. The app works offline, so no data plan is needed when traveling abroad.

Located on King’s Parade, in the centre of Cambridge, Great St Mary's is the official church of the University of Cambridge. As a result, its location is integral to the university legislation – traditionally, undergraduates must live within three miles of St. Mary’s to study at the university. The church is known as Great St Mary's to distinguish it from Little St Mary's, a smaller unrelated church on Trumpington Street. Great St Mary's also houses the University Organ and University Clock. The latter's chimes, known as the Cambridge Chimes, are also used by Big Ben, the clock tower of the Houses of Parliament in London.

The current building has stood on King’s Parade since 1608, although the church itself has existed here in some form since at least 1205. Designed in the Late Perpendicular style, Great St Mary's was a centre for debates and sermons during the English Reformation, which began in Cambridge.

Why You Should Visit:
As well as viewing the beautiful nave, you can climb the bell tower (admission fee) to the viewing platform for a spectacular panorama of the city.

Tip:
The acoustics here are excellent for concerts (watch for a schedule) and be sure to check out the first edition King James Bible, on the left-hand side, as you enter the church.
If you climb the tower, try to be the first in your group and go up quickly (very narrow stairs), so you have one minute alone on the top.


Image by Jean-Christophe BENOIST on Wikimedia under Creative Commons License.
2

King’s College Chapel has stood in Cambridge since 1515 when Henry VIII was King of England. As its name suggests, the chapel was built to provide a place of worship for residents of nearby King’s College, at the western end of the city’s sprawling university campus. The chapel is considered to be one of the city’s finest examples of late Gothic English architecture. The interior of the chapel building is notable for its ornate fan vault ceiling, as well as elements of Renaissance-era design. Nikolaus Pevsner, a leading expert on ecclesiastical architecture, stated that King’s College Chapel contains the UK’s finest surviving examples of Italian decoration. The chapel is one of Cambridge’s most distinctive buildings and is featured on the city council logo.

The chapel is known for its exquisite original stained glass windows, which date from the 16th century. Still an active place of worship, King’s College Chapel is also used for college events and concerts, including the college music society’s May Week Concert, where the audience is treated to free champagne and strawberries on the church lawn. The chapel has a rich musical history, on account of its exceptional acoustics, and has a world-famous men’s choir.

Why You Should Visit:
This chapel is like a cathedral in scale and grandeur with high stained glass windows and a wonderful ornate ceiling which is worth seeing on its own.
The grounds offer a superb view of the chapel exterior and other buildings, as well as the river.

Tip:
Try going to Evensong at 5:30pm (you need to get there around 5pm) which is not chargeable, but has a retiring collection; the service is lovely and you can sit within the chapel and soak up the atmosphere of this ancient building.

St. Bene’t’s Church stands on the eponymous street, close to King’s and Corpus Christi colleges, and The Backs, an area of parkland around the River Cam to the west. It may not be the most well known of Cambridge’s many historic buildings, but it is in fact the oldest – the church has stood on this site since at least 1050 AD. The church, originally known as St. Benedict’s, is famed for its distinctive Anglo-Saxon square tower, whilst the rest of the building was remodelled in the Victorian era. Michael Ramsey, a former Archbishop of Canterbury, was vicar at St. Bene’t’s until 1938.

An evangelical Anglican church, St. Bene’t’s has always played a key role within the city’s famous university community. The church bells, present in the tower since the 13th century, had been used to call students to lectures and exams throughout the Middle Ages. St. Bene’t’s retains close links with the nearby Corpus Christi College, provides a chaplain for the college to this day. The church holds Holy Communion at 8am on Sundays, with a Eucharist service following afterwards. There is also a regular discussion group at the church, as well as a ‘bring and share’ supper evening each month.
Image by Cmglee on Wikimedia under Creative Commons License.
4

St Edward King and Martyr church stands on Peas Hill in the heart of historic Cambridge, and has been present in this spot since the 13th century. The church is named after Edward the Martyr, King of England in the 10th century and half-brother of his successor, Ethelred the Unready. An Anglican church, St Edward King and Martyr has played a major role in the religious history of England. It is believed to be the site of the first sermon denouncing Catholicism in the UK, and is nicknamed the ‘Cradle of the Reformation’. The English Reformation took place in the early 16th century, and saw English churches denounce the Pope and set up the Anglican church.

The present church building was completed in 1400, and has been extended and restored over the following centuries. The present east window, designed by Sir Gilbert Scott, was added during Victorian era restoration. The church holds three services on Sunday, at 8am, 11am and 5pm. There are also talks and contemporary services held on Tuesday and Wednesday evening, catering for the city’s large student population. St. Edward’s, as it is known locally, prides itself on being a meditative place of worship, and its 5pm Sunday service is based around the Iona and Taize principles of meditative worship.
Image by Magnus Manske on Wikimedia under Creative Commons License.
5

The Holy Trinity Church is situated on the corner of Market Street and Sidney Street, in the shopping district of central Cambridge. The building dates back over 800 years and was constructed to replace a previous church, destroyed by fire in 1174. Only the western wall remains of the original structure; the church was developed heavily during the English Reformation and is an example of the Gothic Perpendicular style.

The temple played a key role in the city’s spiritual revival in Georgian England. The preacher at this time, Charles Simeon, increased the church’s popularity with an evangelical style that was at odds with the Anglican customs of the age. Simeon also helped to set up the Church Missionary Society, beginning the English church tradition of sending religious missions to troubled countries overseas.

Still a broadly evangelical church in the image of its former preacher, Holy Trinity Church holds a morning communion each Sunday at 9.30am. A children’s church service runs alongside the main service each Sunday morning. There is also an evening service on Sundays at 6.30pm. The church is a centre of student life within Cambridge, and holds an additional 11.30am Sunday service during term times, followed by a students’ social lunch.
Image by Richard Rogerson on Wikimedia under Creative Commons License.
6

6) Church of the Holy Sepulchre

The Church of the Holy Sepulchre is found on Bridge Street in Cambridge city centre. One of the city’s oldest buildings, it has been in place since 1130. Known locally as The Round Church, it was designed in tribute to the rotunda at the Holy Sepulchre church in Jerusalem. The church has been extended and restored several times from its original structure, when it served as a chapel for wayfarers along Bridge Street, a former Roman Road which led out of the city. The glass in the east window was destroyed by a German bomb in World War II and subsequently replaced.

In 1994, the small Grade I listed church was ruled unsuitable to house its growing congregation, and is no longer used as a place of worship. Christian Heritage have reopened the church as a museum, featuring an exhibition on the history and impact of Christianity in England. The redundant church also houses a library of theological texts, and offers a range of courses and lectures on the Christian faith. The museum also offers guided tours of places of worship and other significant buildings in the city. These start from the Round Church on Sundays at 2.30pm and Wednesdays at 11.00am.
Image by thetempletrail on Flickr under Creative Commons License.
7

Located on the appropriately named Jesus Lane, close to Jesus College, north of the Cambridge University campus, the new All Saints' Church was built in 1865, replacing the medieval church on St. John's Street. All Saints' has historical links with the nearby college throughout its history, dating from the college's origins as a convent in the Middle Ages. The new church was established opposite Jesus College, and was designed by G. F. Bodley, a pupil of renowned architect Sir Gilbert Scott. All Saints was consecrated in 1864, with the present tower and spire added in the following decade.

A notable example of the Gothic Revival style of ecclesiastical architecture, the church is Grade II listed. The distinctive spire makes All Saints the third tallest building in Cambridge and can be seen across the city. The church’s ornate interior is a fine example of the late 18th century Arts & Crafts Movement. The movement saw a return to the colorful decorative style of medieval and romantic cultures in art and architecture. Still an active place of worship, the church holds services each Sunday.

Why You Should Visit:
From candlesticks to pews to fabric and walls, this church is grandly decorated and retaining a medieval muted light – just dazzling!