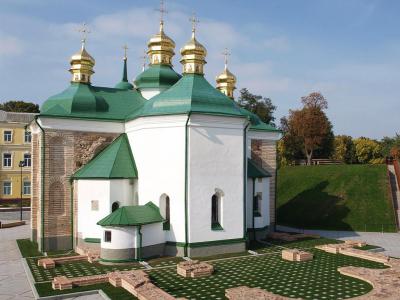 Church of the Saviour at Berestove, Kiev

The Church of the Saviour at Berestove is one of the oldest religious structures in Kiev, originally built around the 12th century AD. Historians say its construction was ordered by Vladimir Monomakh (1113–1125), ruler of Kievan Principality, and was the biggest religious site of the time in the city. It boasted three naves, same number of apses and reportedly three domes, too. The structure was grandiose and innovative in terms of both, presumably Gothic design and applied construction materials. The original church was ravaged by invading Mongols in 1240. In 1482, Khan Meñli I Giray took his toll and destroyed much of what was left of the building.

In 1640-1642, Orthodox Metropolitan Petro Mohyla rebuilt the church having incorporated its old western wall, which survived almost intact, into the new building. The church was further renovated and decorated in the 18th and then in early 19th centuries, having its style brought closer to proto-Baroque or the so-called Ukrainian Baroque. In 1909, the façade was cleansed to reveal original 12th century frescoes. In the 1970s, more 12th century frescoes were uncovered and restored.

The Church of the Saviour at Berestove forms part of the Kiev Pechersk Lavra Historic-Cultural Preserve which was declared a UNESCO world heritage site in 1991.
Image Courtesy of Wikimedia and Rasal Hague.