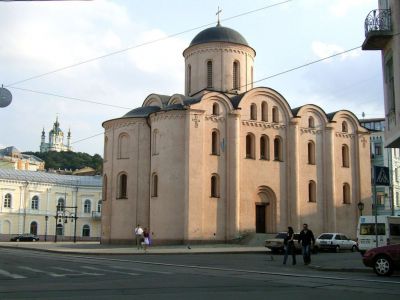 Church of the Theotokos of Pyrogoshcha, Kiev

The Church of the Theotokos of Pyrogoshcha is a small temple in the Podil district of Kiev. Just like many other local churches, it has gone through a series of misfortunes. Built in 1132-1136, it was the first stone church in the area. Its walls were decorated by frescoes and the floors covered with flagstone mosaic.

In the Middle Ages, the church was a place for education and study, a hospital for the poor, and then an archive.

In the course of time, it has sustained many reconstructions, the most notable of which took place in the early 17th century, done by Italian architect Brachi. In the 1870s, there was another restoration, by architect Gryhorovych-Barskyi, which gave the church its Baroque style appearance, and then one more in the 19th century, which brought classicist elements to the ensemble. The most recent renovation took place in 1998.
Image by Alexander Noskin on Wikimedia under Creative Commons License.