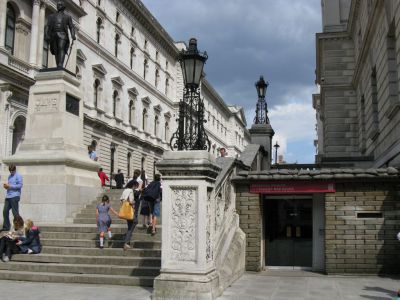 The Churchill War Rooms is a secret bunker underneath the former Office of Public Information in London (currently the Treasury). From here Winston Churchill commanded the British forces and recorded radio addresses to the nation during World War II. The unassuming entrance at the bottom of the Whitehall's Clive Steps on King Charles Street makes it easy to miss. The Germans never thought anyone would be stupid or brave enough to hide the emergency government in such plain sight.

The bunker was built in 1938 and then expanded and reinforced with a bomb-proof ceiling during the war. Even then, experts say, it wasn't totally bomb-proof if hit directly. The bunker is only 12 feet underground whereas Hitler's bunker was 180 feet.

Quite spacious – with over 30,000 square feet – it accommodates offices, conference rooms and sleeping quarters for the Wartime Cabinet and their families. When the war ended, they simply took their belongings and left. The facility now looks pretty much like it was back in 1945. The clocks inside are set to 4.58pm - the time when the first cabinet meeting here started on 15 October 1940. The manual calendar in the Map Room shows 16 August 1945 - the final day the facility was used as a strategic site - the day after Japan had officially surrendered.

Found here black phones with green handles are the breakthrough technology of the 1940s. Scrambler phones for secret communication, they made it impossible for spies to listen into a conversation by producing a so-called white noise. These phones took up to 20 minutes to warm up before they were ready to use.

The maps on the walls are dotted with thousands of tiny holes left by pins used to monitor the progression of Allied forces and convoys across the ocean. Some parts of the maps are so badly damaged that had to be patched over.

Churchill slept only three or so nights in this bunker, but often used his bedroom for afternoon naps and was quite famous for holding meetings here in various states of undress.

Among other artifacts depicting Churchill's life here is the fire bucket behind his chair which he used as an ashtray. Rumors say that the Marine guards used to sell Churchill's cigar stubs, left in the bucket, as souvenirs.

Underneath the secret bunker is another bunker for maintenance personnel and supporting staff. Most visitors to the War Rooms don't realize it exists as these sub-basement quarters are strictly-out-of-bounds. Filled with miles of lagging, pipes, wires and cables, these tunnels run for miles under Downing Street, the Houses of Parliament, Trafalgar Square and many other strategic locations in London. One of these caves is said to have been Churchill’s wine cellar.

Tip:
Pre-book your ticket(s) online to jump the standby queue outside!
Allow a minimum of just over an hour for the audio tour.
Please be aware that there are not many food places in the immediate vicinity.