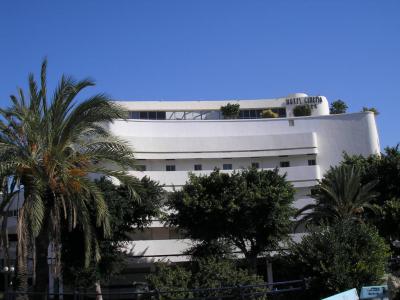 A former Bauhaus cinema centrally located in Dizengoff Square, this remarkable International-style construction with undulating balconies and geometric windows has been creatively renovated into a charming boutique hotel, and features film-themed decor and exhibits of vintage cameras and projectors, along with a gallery documenting the building's history. As a guest, you are witness to the memories of the famous Esther Cinema – one of the first movie halls in Tel Aviv – and to the new building that now houses it, which remains preeminent even amongst the city's abundance of UNESCO-recognized early twentieth-century architecture.

Although at the time of their construction, all the buildings around Dizengoff Square had a different purpose, they were carefully planned to form a circle, be three stories high, and have the same style of façade – despite the voiced concerns of some contemporary critics, who debated that a shared façade would go against the principles of modernist architecture. As the exhibition literature notes, "The use of concrete was a popular choice for Bauhaus/International-style architects, and the flowing concrete strips highlight a horizontal movement between the balconies and external walkways of each building in one continuous movement." Furthermore, its columns and pilotis (supports that lift a building above the ground or a body of water), are "typical of the local Bauhaus style."

Tip:
Frishman Street (a few blocks from the hotel) takes you to the beach and the spectacular boardwalk.
Image Courtesy of Wikimedia and Deror Avi.