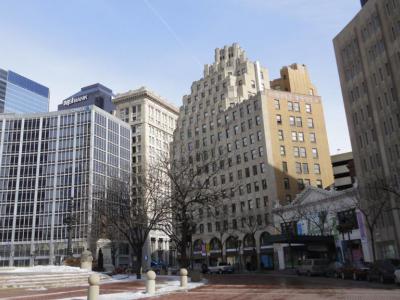 Circle Tower, the tallest building on Monument Circle at 57.91 meters, was erected in 1930. An example of Art Deco architecture, with its ziggurat peak and sculptures, it is made of Indiana limestone. Its facade and entrances are decorated with Egyptian elements. Included on the National Register of Historic Places, it serves as an office building.
Image by Paul Sableman on Flickr under Creative Commons License.