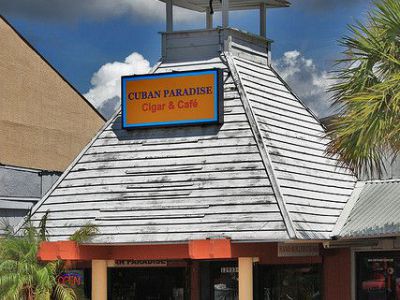 The Circulo Cubano, or Cuban Club, was the city's principal meeting place. This building housed a cantina, pharmacy, ballroom, library, spa, and bowling alley. The current building was built in 1917 to replace a building that had burned down previously.

The Cubans who settled in Ybor City came by way of Key West. Ybor and Tampa proved to be a better location for their cigar empire thanks to Henry Plant's railroad, which connected the area to Jacksonville and New York. It wouldn't be until 1912 that Henry Flagler's Overseas Railroad would reach Key West. The immigrants considered themselves exiles committed to liberating Cuba from Spanish colonial rule. There were several Cuban Clubs around the area that served as meeting places. Cuban revolutionary Jose Marti survived an assassination attempt here in 1892.

The building itself was an important symbol for the locals, and its presence in the city helped many Cubans decide to stay after Cuban independence was achieved. El Circulo Cubano was a mutual aid society, and the membership was made up of mostly working-class Cubans. Members were granted services that the cigar factories did not provide, like health care and English classes. As a result, El Circulo Cubano had significant economic and social importance in the community.

The Cuban Club is listed on the US National Register of Historic Places and featured in the American Institute of Architect's Florida Architecture: 100 Years, 100 Places.
Image Courtesy of Flickr and aresauburn™.