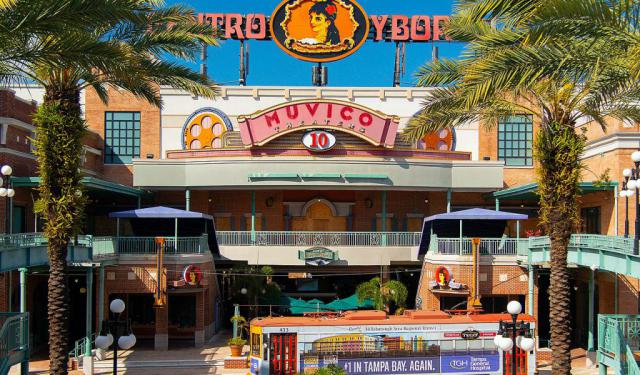 Ybor City was founded in 1885 by Vicente Martinez Ybor, a Spanish entrepreneur who became a noted industrialist and cigar manufacturer in Cuba. Together with other cigar manufacturers, over the next 50 years the factories of Ybor City had rolled annually hundreds of millions of cigars. Ybor City was unique in the American South as a successful town almost entirely populated and owned by immigrants.

Today, Ybor City Historic District is a center for handmade Cuban cigars, an immigrant melting pot, artist enclave and entertainment hub. Here, the enchanting streets are filled with historical houses, museums, galleries, cigar stores, Caribbean and South American restaurants, eclectic cafes, nightclubs and souvenir shops. Take this self-guided walking tour to explore the historical sights that contributed to the development of what once was called "Cigar City".
Image Courtesy of Wikimedia and Peter K Burian.
How it works: Download the app "GPSmyCity: Walks in 1K+ Cities" from iTunes App Store or Google Play to your mobile phone or tablet. The app turns your mobile device into a personal tour guide and its built-in GPS navigation functions guide you from one tour stop to next. The app works offline, so no data plan is needed when traveling abroad.

Situated in what was likely the very first bakery to serve Cuban Bread on American soil, Ybor City Museum State Park is the best place to begin a tour of the Ybor City Historic District. Here you will find informational displays about the cities immigrant population and the cigar-producing heritage they brought with them from Cuba.

The main building and entrance to the museum are housed in La Joven Francesca bakery, established in 1896 but sadly burned down in 1922. The only object left was the brick oven, which owner Francisco Ferlita built a new bakery and a second oven around. The building stands proudly on the corners of East Ninth Ave and North 19th Street, along with a casita and a lovely garden that hosts events throughout the year. The casita is a typical cigar worker's home from the period, built and paid for by the factories as an incentive.

During its heyday, the bakery and garden were one of the town's most popular gathering spots—you could catch up on gossip, grab your day's loaf of Cuban bread, and enjoy a Cuban coffee. The bakery was a major supplier for bread to the entire city with daily delivery service. Ybor City residents would put nails on their front door frames from which the bread was hung.

The museum tracks Ybor City's history from the development of the cigar industry with self-guided exhibits, a video presentation, and written and audio information. The park is open Wednesday through Saturday from 9:00 a.m. until 5:00 p.m.

Image Courtesy of Wikimedia and Ebyabe.
2

The Circulo Cubano, or Cuban Club, was the city's principal meeting place. This building housed a cantina, pharmacy, ballroom, library, spa, and bowling alley. The current building was built in 1917 to replace a building that had burned down previously.

The Cubans who settled in Ybor City came by way of Key West. Ybor and Tampa proved to be a better location for their cigar empire thanks to Henry Plant's railroad, which connected the area to Jacksonville and New York. It wouldn't be until 1912 that Henry Flagler's Overseas Railroad would reach Key West. The immigrants considered themselves exiles committed to liberating Cuba from Spanish colonial rule. There were several Cuban Clubs around the area that served as meeting places. Cuban revolutionary Jose Marti survived an assassination attempt here in 1892.

The building itself was an important symbol for the locals, and its presence in the city helped many Cubans decide to stay after Cuban independence was achieved. El Circulo Cubano was a mutual aid society, and the membership was made up of mostly working-class Cubans. Members were granted services that the cigar factories did not provide, like health care and English classes. As a result, El Circulo Cubano had significant economic and social importance in the community.

The Cuban Club is listed on the US National Register of Historic Places and featured in the American Institute of Architect's Florida Architecture: 100 Years, 100 Places.
Image Courtesy of Flickr and aresauburn™.
3

The Ybor Factory Building is a historic site in Tampa. The factory was built in 1886 by Vicente Martinez-Ybor as he moved the production of his Príncipe de Gales ("Prince of Wales") cigar line from Key West to the new company town he founded just northeast of Tampa in 1885. The headquarters of Ybor's holding company was directly across 9th Avenue in the El Pasaje building, which was constructed at about the same time.

The three-story structure was the first brick cigar factory in Tampa and the largest cigar factory in the world at the time. Over the next few decades, skilled tabaqueros (cigar makers) would roll hundreds of millions of cigars on wooden workbenches set close together in the building's wide, sunlit rolling rooms.

After Ybor died in 1896, the building was owned by a succession of other cigar manufacturers and continued to be a productive cigar factory until after World War II, when the industry (and Ybor City in general) entered a long period of decline.

Over the next few decades, the buildings were vacant, then were used as gallery and studio space for artists, then converted to a festival marketplace called Ybor Square in the mid-1970s. The Ybor Factory building was added to the U.S. National Register of Historic Places on November 15, 1972.

Today this century-old iconic landmark in Tampa is being renovated into a museum for visitors to understand Ybor City's once-thriving cigar industry.
Image Courtesy of Ebyabe.
Sight description based on Wikipedia.
4

This tiny park is situated on the corners of East Eighth Avenue and North 13th Street in Historic Ybor. In a strange twist of history, the park actually belongs to Cuba, so in the technical sense, when you cross the pathway into the park, you are stepping onto Cuban soil! The small plot was donated to Cuba in 1956, three years before the communist revolution. Since then, the property has been maintained by local Cuban historical groups.

The property was donated to the island by resident and prominent Cuban revolutionary Paulina Pedroso. Pedroso ran a boarding house on this site, where Jose Marti stayed during his visits to the Tampa area. Marti stayed here while recovering from the attempt on his life in 1892.

In the park today, you'll find monuments honoring Marti and Jose Antonio de la Caridad Maceo y Grajales, along with statues and a mural. Parts of this park contain soil imported from each of Cuba's provinces. It's a small park that will only take a few minutes to visit, but the history of the place is impressive for its small size.
Image Courtesy of Wikimedia and Ebyabe.
5

The large Centro Ybor shopping plaza is built around the former grounds and present-day location of the Centro Español de Tampa. The Centro Español was established as a mutual social club in 1891 and still stands on the corner of East Seventh Avenue and North 16th Street. Like other social clubs in the area, the Centro helps community members band together in fraternity and maintain a historical link between the local immigrants and Spain.

Several significant attractions call Centro Ybor their home, including the Tampa Improv and GameTime Entertainment Center. The plaza was built in 2000, and there are more than a dozen restaurants and bars in the plaza. There are several popular microbreweries and a wine bar, as well as twenty retailers. Unfortunately, the anchor AMC/Muvico Theater has now closed its doors.

If you are looking for a special trip memento, consider visiting the Centro Ybor shopping plaza. It's a great place to find an authentic Ybor City souvenir that will remind you about this trip for many years.
Image Courtesy of Flickr and psyberartist.
6

If you're looking for a little taste of what Ybor City is all about, you've got to stop at King Corona. This cigar and coffee shop offers a glimpse of days gone by. Here, you can retreat to what locals refer to as a friendly oasis. It's the perfect place to get together with old friends and make new friends, too.

Be sure to budget enough time to hang out and enjoy the local vibe. You can browse the nation's only tri-lingual newspaper, La Gaceta (English, Spanish, and Italian). If you're hungry after your requisite Cuban coffee, enjoy a bite to eat from their cafe menu.

King Corona is also a great place to pick up gifts for family and friends. Take home a sampling of their best cigars or even a few pounds of their Ybor Blend coffee.
Image Courtesy of Wikimedia and Soonadracula.
7

After walking the Ybor City Historic District, you may be working up an appetite. If that's the case, there's no better option than stopping by the historic Columbia Restaurant. Columbia is a Florida chain, with branches in Tampa, Sarasota, Orlando, Clearwater, and St. Augustine. But the Ybor City is the original restaurant, in constant operation since 1905. It is Florida's oldest restaurant.

Columbia has been honored as one of American's most historic restaurants and one of Florida's best. Southern Living Magazine even named it one of their favorite romantic restaurants. It goes without saying, but the food is spectacular. You'll find a host of classic Spanish and Cuban dishes. Their tapas, salads, and Cuban sandwiches are high on everyone's lists.

The Hernandez Gonzmart family opened the restaurant, and the operation has stayed in the family ever since. The recipes haven't changed much, but instead of cigar workers just off from the factory, the restaurant now serves celebrities, local regulars, and tourists. The building has grown from a small 60-seat counter to a world-class restaurant.

For the full experience, make sure you plan to arrive for one of their dinner shows featuring Flamenco dancers. The shows are on Friday and Saturday nights at 7:00 and 9:00 p.m. The restaurant is open 365 days a year, and reservations are always recommended.
Image Courtesy of Wikimedia and Infrogmation of New Orleans.