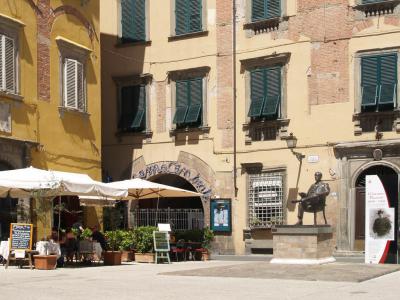 The Citadel square (Piazza Cittadella) is in the pedestrian area of ​​the city, a few meters from Piazza San Michele, and is famous above all for the presence of the house, now a museum, which gave birth to the composer Giacomo Puccini, to whom the image of Lucca in the world is inextricably linked.

In the center of the square there is a statue representing the musician from Lucca sitting on a chair smoking a cigarette. It is a final tribute, that is respected by the Italians and tourists who are traveling and make a stop.

Initially called Piazza Di Poggio due to the presence of the homonymous family, one of the most powerful in medieval Lucca, it had to change its name in 1522, when the same family challenged the other patrician families of Lucca for power, in what went down in history as the conspiracy of the Poggi, but it was defeated and its members were exiled.

It was therefore first called Piazza del Grano and then Piazza Cittadella due to the presence of the building, famous in the Baroque era for the hanging garden that was located on the large terrace that can be seen from the square, owned by the rich family of the same name from Lucca.
Image Courtesy of Wikimedia and Hans Hagenaars.
Sight description based on Wikipedia.