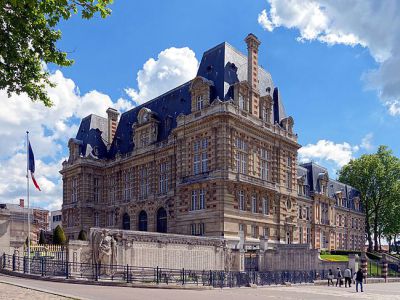 The Versailles City Hall (Hôtel de Ville) that you will see today isn’t very old, but the original building dated back to the late 17th century and the “new” building has kept much of the early architecture.

The original building was constructed in 1670 for the Marquis de Bellefonds, Bernadin Gigault. It was a beautiful chateau with grounds stretching to the edge of the gardens of the palace.

When the Royal Stables were built, the marquis decided they spoiled his view and he sold the chateau to Philippe of Lorraine, known as the Chevalier de Lorraine. This unscrupulous young man was the lover of Philippe, Duc d’Orleans, Louis 14th’s brother.

In 1680, the duke’s wife used her friendship with the king to have the chevalier imprisoned in the island fortress the Chateau d’If off the coast of Marseille. From there, the chevalier was banished to Rome and Louis 14th annexed the chateau and gave it to his son Louis de Bourbon, the Count of Vermandois.

When the count died a few years later, the chateau became the home of his sister Marie-Anne, the Princess de Conti, who used it for great parties that were the toast of Versailles. Louis de Bourbon and Marie-Anne were Louis 14th children by his mistress Louise de la Vallière.

The princess later sold the chateau to a speculator who stripped the building of its furniture and finery. In 1723 Louis 15th bought it for his Prime Minister, Louis-Hénri de Bourbon. He had it renovated and opened the grounds to the public giving them easier access between the Saint Louis and Notre Dame districts.

During the French Revolution it became the “temporary” seat of the Town Council. In 1821 they were still there and the chateau became the official Hôtel de Ville. In 1899 the building was too small and the Mayor Edouard Lefbvre had it pulled down and commissioned Hénri le Grand to build the new City Hall, based on plans of the chateau.
Image Courtesy of Wikimedia and Velvet.