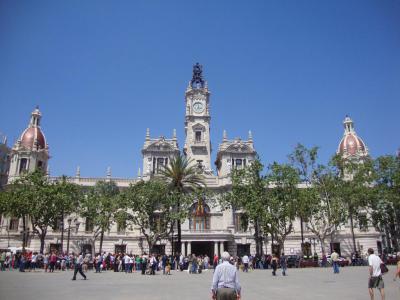 City Hall, known locally as Ayuntamiento, is the center of government in Valencia. Construction on the building began in 1758 but was not completed until the early 20th century. As such, the building features a number of architectural styles.

Visitors to the City Hall will enjoy the Municipal Historical Archive and Museum. Tourists can also step out onto the balcony to see an impressive view of the city. Security is tight at the City Hall but that shouldn't stand in the way of experiencing this impressive building.

The building is located within the Town Hall Square. The City Hall is open from 8 AM to 3 PM, Monday through Friday. There is no entrance fee for the City Hall or its museum.
Image Courtesy of Wikimedia and El fosilmaníaco.