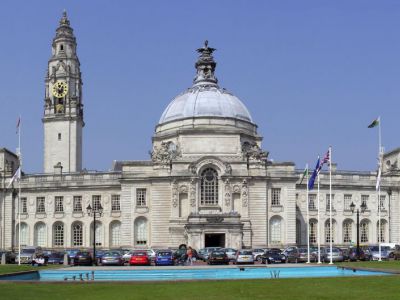 City Hall is a civic building in Cathays Park, Cardiff. Built of Portland stone, it became the fifth building to serve as Cardiff's centre of local government when it opened in October 1906. The competition to design a town hall and adjacent law courts for Cardiff was won in 1897 by the firm of Lanchester, Stewart and Rickards. Construction was carried out by local builders, E. Turner and Sons. Cardiff received its city charter while construction was underway, in 1905. The building is an important early example of the Edwardian Baroque style.
Image by Yummifruitbat on Wikimedia under Creative Commons License.
Sight description based on wikipedia