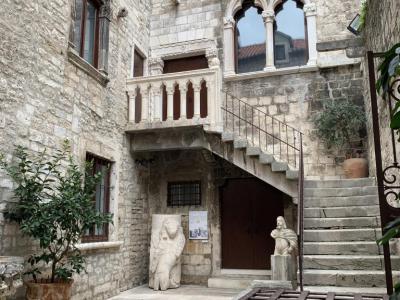 Established in 1946, the City Museum of Split is located in the northeastern part of the Diocletian Palace, within the complex of Medieval buildings centered around a remarkable Gothic-Renaissance edifice which once belonged to the noble family of Papalic. The family's coat of arms is featured on one of the portals.

The Papalic Palace (Papaliceva Palaca) was designed and built by the native master Juraj of Dalmatia (Juraj Dalmatinac) in the 15th century. The beautifully executed courtyard has richly decorated portal and loggia. The Renaissance hall with a fine window decoration and a well preserved wooden ceiling completes the courtyard ensemble.

The museum is found on the first floor. Inside, its permanent collection features artifacts and a variety of sculptures, dating from the Diocletian times, through the 12th-14th centuries, when Split was an autonomous commune, and more. Among the exhibits there are pieces of medieval weaponry, various paintings and artworks, along with fragments of sculptures, monuments and statues that were once part of the buildings in Split. The dining room, on the first floor, is furnished just as it was back in the day, when the Papalic family owned the house, giving the idea of how the nobility of that time lived.

Here you will also find the city statute, seal and coins, plus the Romanesque sculpture from the belfry of the local cathedral attributed to the period of Venetian rule (15th- 16th centuries). There are also numerous documents, photographs, maps and manuscripts relating to the more recent history of Split.

Additionally, within the museum there is a gallery of Emanuel Vidovic, a major local painter of the 20th century and one of the foremost protagonists of Croatian modern painting.
Image Courtesy of Roger.