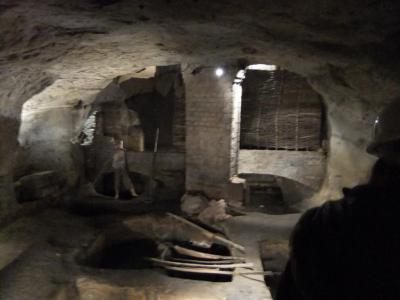 City of Caves, Nottingham (must see)

City of Caves was an award-winning visitor attraction in Nottingham which consists of a network of caves, carved out of sandstone that have been variously used over the years as a tannery, public house cellars, and as an air raid shelter.

The attraction has been run by the Galleries of Justice since 2004 and is accessed from the upper mall of the Broadmarsh Shopping Centre. The caves here are some of the oldest remaining in the city, with pottery finds dating them to 1270-1300, and were inhabited from at least the 17th century until 1845 when the St. Mary’s Inclosure Act banned the renting of cellars and caves as homes for the poor. None of the caves are natural, they were all cut into the sandstone for use as houses, cellars and place of work by the inhabitants of the city.

Two caves cut into the cliff face and opening out to daylight housed the only known underground tannery in Britain. The Pillar Cave was originally cut around 1250 but had been filled in by a rock fall by 1400. Cleared and reopened as part of the tannery in 1500 with circular pits cut to hold barrels. A second cave was also cut with rectangular clay-lined vats. The small size of the vats in these caves indicate that they were probably used for sheep or goats skins rather than cowhide. There was an opening to the River Leen where they would wash the skins in the town's drinking water.