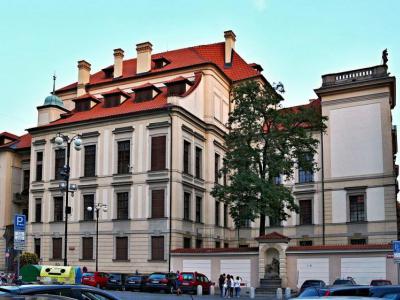 The Clam-Gallas Palace is a baroque palace in Prague. This palace is on Husova Street, in Prague Old Town. The Palace was first designed by the imperial court architect Johann Bernhard Fischer von Erlach, from Vienna. It was built in 1714-18 by the Italian architect Domenico Canevale. During the rest of the 18th century, lavish balls and concerts were held in the Palace, and were attended by noteworthy artists including Mozart and Beethoven.

The Clam–Gallas Palace was built for the Viceroy of Naples, Johann Wenceslaus, Count of Gallas. The Gallas family died out in 1757, and at that point the Palace was inherited by Kristian Filip of Clam, son of Gallas' sister, and the Clam-Gallas family was created.

At the present time Opera Barocca performs in the palace in the evenings.
Image by User:Miaow Miaow on Wikimedia under Creative Commons License.
Sight description based on wikipedia