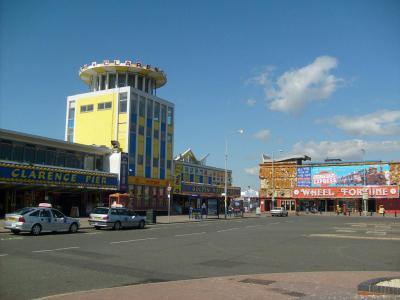 Clarence Pier was originally constructed in 1861 and boasted a regular ferry service to the Isle Of Wight. It was damaged by air raids during World War II and opened in its current form in 1961.

The main entrance to the pier from the road is via a striking pavilion building with distinctive yellow and blue cladding and a small tower. This originally housed an amusement arcade and cafe although in more recent years, the upper floor has variously been used for "Pirate Pete's" indoor children's playground, a Wimpy bar and a Prize Bingo hall while the 'Golden Horseshoe' amusement arcade remains on the ground floor.

A smaller building, perpendicular but not physically joined to the main pavilion houses another amusement arcade, the "Wheel Of Fortune" and some small gift shops. The upper floor was originally used as a public house, but in 1994 it was converted into 'Jurassic 3001', a futuristic dinosaur themed dark ride. The ride was well-known for its animatronic triceratops, whose head protruded from the side of the building and roared occasionally at passers-by, however this has since been removed.

The attraction closed in 2004, yet all ride signage and theming on the building remained until the end of 2011. The upper floor space previously occupied by this ride is currently being converted to apartments for 2012, according to planning publications.
Image by Unisouth on Wikimedia under Creative Commons License.
Sight description based on wikipedia