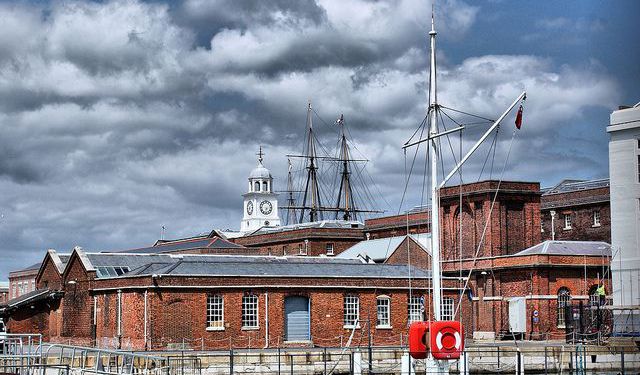 Naval life has played a crucial role in the development and in the existence of the city. Most of the events that the area experienced are connected to its exit to the sea. This tour is aimed to reflect them in the region's museums and other monuments that will help you discover the beautiful sea history and present port life of the city. Take the tour and explore these beautiful events in the history and present life of the port region of Portsmouth.
Image Courtesy of Flickr and David Spender.
How it works: Download the app "GPSmyCity: Walks in 1K+ Cities" from iTunes App Store or Google Play to your mobile phone or tablet. The app turns your mobile device into a personal tour guide and its built-in GPS navigation functions guide you from one tour stop to next. The app works offline, so no data plan is needed when traveling abroad.

The Victory Gate is the main entrance of the Portsmouth historic dockyard. The gate dates back to the beginning of the 18th century. The right part of the gate, as you pass through it, has a sign that is meant to commemorate the visit of Queen Anne in the year 1711. And even if it has survived World War II, it has still lost 2 parts, namely its arch and lantern.
Image Courtesy of Flickr and Graham Tiller.
2

HMS Warrior was the first armour-plated, iron-hulled warship, built for the Royal Navy in response to the first ironclad warship, the French Gloire, launched a year earlier. When completed in October 1861, Warrior was the largest, fastest, most heavily armed and most heavily armoured warship the world had seen. She was almost twice the size of Gloire and thoroughly outclassed the French ship in speed, armour, and gunnery. Warrior did not introduce any radical new technology, but for the first time combined steam engines, rifled breech-loading guns, iron construction, iron armour, and the propeller in one ship, and all built to an unprecedented scale.

Her construction started a competition between guns and armour that did not end until air power made battleships obsolete in the Second World War. Warrior became an early example of the trend towards rapid battleship obsolescence and was withdrawn as a fighting unit in May 1883. Listed as part of the National Historic Fleet, Core Collection, she is now a museum ship in Portsmouth.

Warrior had a similar area of sail to contemporary line-of-battle ships, but her larger size meant she was slower in ordinary weather and had to use steam to keep up. However, her iron construction and the stability it imparted to the ship meant she could carry more sail in a strong wind and was then as fast as the rest. Her longer, finer hull gave her great power in a seaway, so that she could take the windward position sailing against wooden rivals in bad weather.

Image Courtesy of Flickr and Karen Roe.
Sight description based on Wikipedia.
3

The Action Stations is an interplay gallery aimed to make its visitors experience what it feels like to command a Royal Marines War Ship or fly a helicopter.Visitors can try their hand at displays or climbing walls, activities that were necessary in the senior service, and become acquainted with marine technology.
Image Courtesy of Flickr and Karen Roe.
4

The Mast Pond was dug in the year 1665. It was formed and built up by soldiers and Dutch prisoners of the period. The main aim of the Mast Pond was to keep the ships that were recovered from war damage on its waters. Today it still performs this function, and it is now the home of reconstructed ships that are financed by the Portsmouth dockyard Historical Trust.
Image Courtesy of Wikimedia and Chris Talbot.
5

Considering that the Dockyard Apprentice is today an exhibition place, it was once the world's greatest boat-building industry center. This impressive industrial complex of the 18th and 19th centuries once had 20,000 employers. Visit the place and get the chance to feel how was it to be a part of this great dreadnought-producing center.
Image Courtesy of Wikimedia and Editor5807.
6

The Nauticalia shop is specialized namely in the selling of sea-related souvenirs, presents and artifacts. The range of the things is indeed very large, diverse and one of the most interesting to be found in the area.
Image Courtesy of Flickr and • w a a •.
7

The Semaphore Tower was unfortunately seriously damaged by a fire at the beginning at the 20th century, yet today it was rebuilt and it now includes the resited Lion gate. The greatest reason for doing reconstruction was to accentuate the building's architectural historic importance for attracting tourists. The building's main aim is to be the Head Office of the Naval Base Commander and Queen's Harbour Master.
Image Courtesy of Wikimedia and Chris Talbot.
8

The Royal Naval Museum has 4 exhibition galleries to visit. It exibits such such artifacts as Nelson's Life Mask taken from his face at he beginning of the 19th century. One will also find the famous Enigma Machine, the very one that played a decisive role in the Battle of the Atlantic in 2nd World War. Of course it is interesting to learn about sea artifacts and guns that were used in battle at the time.
Image Courtesy of Wikimedia and Jaguar.
9

Armed with a pair of 6-inch (152 mm) guns and having a shallow draught, M33 was designed for coastal bombardment. Commanded by Lieutenant Commander Preston-Thomas, her first active operation was the support of the British landings at Suvla during the Battle of Gallipoli in August 1915. She remained stationed at Gallipoli until the evacuation in January, 1916. For the remainder of the war she served in the Mediterranean and was involved in the seizure of the Greek fleet at Salamis Bay on 1 September 1916.

Image Courtesy of Wikimedia and Dogboy.
Sight description based on Wikipedia.
10

HMS Victory is a 104-gun first-rate ship of the line of the Royal Navy, laid down in 1759 and launched in 1765. She is most famous as Lord Nelson's flagship at the Battle of Trafalgar in 1805. She was also Keppel's flagship at Ushant, Howe's flagship at Cape Spartel and Jervis's flagship at Cape St Vincent. After 1824 she served as a harbour ship. In 1922 she was moved to a dry dock at Portsmouth, and preserved as a museum ship. She continues to be flagship of the Second Sea Lord and is the oldest naval ship still in commission.

The outline plans for the Victory arrived in June 1759 and were based on HMS Royal George which had been launched at Woolwich Dockyard in 1756. The naval architect chosen to design the ship was Sir Thomas Slade who, at the time, was the appointed Surveyor of the Navy. She was designed to carry at least 100 guns and was established with that number of guns; in practice, her armament varied from 104 to 106 guns and carronades. Victory attracts around 350,000 visitors per year in her role as a museum ship.
Image Courtesy of Flickr and Karen Roe.
Sight description based on Wikipedia.
11

The Mary Rose Museum is a historical museum located at Historical Dockyards in Portsmouth in the United Kingdom run by the Mary Rose Trust. The museum is dedicated to the 16th century Tudor navy warship Mary Rose as well as the historical context in which she was active. The museum opened in 1984 and displays artefacts from the ship as well as the ship itself in a dedicated ship hall while it has been undergoing conservation. The Mary Rose was a carrack-type warship of the English Tudor navy of King Henry VIII. After serving for 33 years in several wars against France, Scotland and Brittany, and being substantially rebuilt in 1536, she saw her last action July 19, 1545. While leading the attack on the galleys of a French invasion fleet, she sank in the Solent, the straits north of the Isle of Wight.
Image Courtesy of Wikimedia and Geni.
Sight description based on Wikipedia.