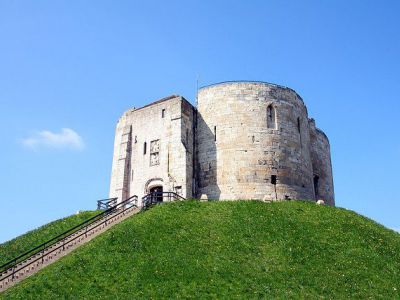 Clifford's Tower is an excellent first stop when visiting York. The panoramic views from the top of the tower give visitors a spectacular overview of Old Minister, York, and the North York Views.

The tower is situated on a tall hill, perfect for providing defense to York. Clifford's Tower represents the most significant portion of the remains of York Castle.

This original tower was the site of a horrific massacre in 1190. A group of about 150 Jews sought protection in the tower. Unfortunately, trust broke down, and the Jews committed suicide and set the tower on fire rather than be slaughtered by Christians.

The tower was rebuilt almost immediately. Construction on the current stone tower was completed by the late 13th century.

Visitors can tour the tower and climb to the top. At the top of the tower, you can walk the open-air wall walk. Tower guards used to patrol the wall walk while watching out for enemy intruders. In addition to fabulous views of the city and countryside, the vantage point provides a look at the rest of the castle's layout. Visitors can also see the "Eye of York" buildings. These include the Female Prison, Debtor's Prison, and the Assize Courts.