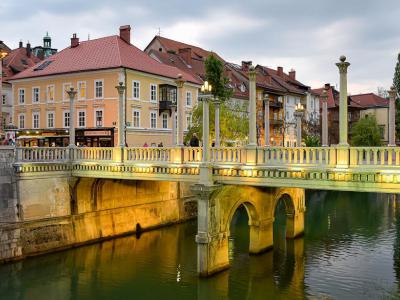 The Cobblers' Bridge is also known as the Shoemakers' Bridge. A bridge has linked the two major areas of Ljubljanski for hundreds of years. The bridge connects Town Square and New Square. The original wooden bridge dated to the 13th century. During the Middle Ages, it was known as the Upper Bridge.

The original bridge had a butcher's shop on it, but the Emperor hated the smell and paid the butcher to relocate. Shoemakers moved into the shop, and the bridge became known as Cobblers' Bridge. The cobblers could live and work on the bridge and avoid paying town taxes, all while advertising to pedestrians crossing the bridge.

Cobblers' Bridge has been rebuilt over the centuries. A cast-iron bridge was built here in 1867 but was later relocated.

The current bridge is made of stone and was planned in 1931 with a unique design. It features short balusters. Taller pillars feature stone balls, while the two central pillars are shorter and support lamps. The bridge platform has a geometric pattern. A statue of Ivan Hribar, Ljubljanski's mayor from 1895-1907, stands next to the bridge.
Image Courtesy of Wikimedia and Jorge Franganillo.