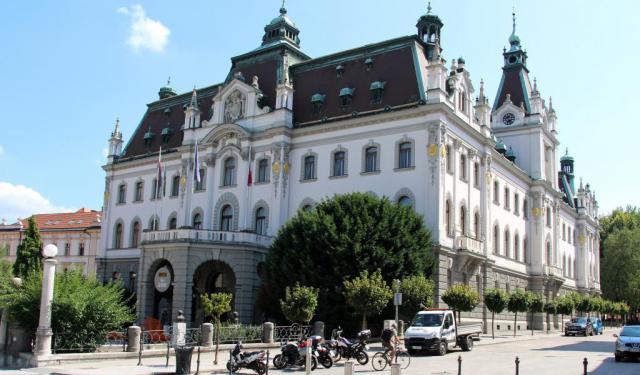 Take this self-guided walking tour to see some of Ljubljana's most prominent historical landmarks.
Image Courtesy of Flickr and Fred Romero.
How it works: Download the app "GPSmyCity: Walks in 1K+ Cities" from iTunes App Store or Google Play to your mobile phone or tablet. The app turns your mobile device into a personal tour guide and its built-in GPS navigation functions guide you from one tour stop to next. The app works offline, so no data plan is needed when traveling abroad.

The Ljubljana Central Pharmacy is one of the most prominent buildings at Preseren Square, the central square of the Slovenian capital of Ljubljana. It is also known as Mayer Palace or Preseren Square 5 Palace.

The Neo-Renaissance building was designed in 1896–97 by Ferdinand Hauser and was built before the end of the century by Gustav Tönnies, whereas the façade was carried out by Filip Supančič. Until World War II, the building also housed a cafe, Preseren Cafe, named after the poet France Preseren (1800–1849). Today it houses the city's central pharmacy.

This location has hosted a church since the 13th century. The original church was built in the Romanesque style. Ljubljana Cathedral was refurbished several times before it was destroyed by fire in 1469.

A new Baroque cathedral was designed and completed in 1706. The cathedral features an octagonal dome and two belfries. One of the tower's bells dates to 1326. The gable between the belfries was built in 1989 to replace the original Baroque gable destroyed in an 1895 earthquake.

The cathedral's facade features various statues of bishops and saints. Niches feature Baroque frescoes. Visitors will find a sundial on the southern side.

The cathedral's interior features original Baroque frescoes. The right-hand side altar angels were created by brothers Paolo and Giuseppe Groppelli. Francesco Robba created the angels on the left of the altar. Statues of the four bishops of Emona, the original Roman settlement, are seated under the dome beam.


Image Courtesy of Wikimedia and Žiga.
3

Ljubljana Town Hall was originally built in the 15th century. An annex was added in the 1700s, giving the building its current appearance. The facade has a Venetian influence, as shown in the gable front, the three-part staircase, and the loggia. Visitors can climb the impressive steps and admire the Venetian-style arched balcony. The town hall also features a pediment with a clock tower.

A Gothic plaque with the original medieval coat of arms from the original town hall building is displayed in the vestibule. A 17th-century statue of Hercules with a lion is also on display in the town hall. This statue was part of the 17th century Hercules Fountain from Old Square. The Hercules statue replaced the monument to Yugoslavia's first king, Peter I. The statue of Peter I was removed by Italian troops during World War II.

The courtyard features arches with intricate designs. In addition, a variety of statues are on display in the courtyard's niches.

Visitors can tour the wedding hall, the banquet hall, and the Grand Council Chamber. Ljubljana's famous mayor from 1896 and 1910, Ivan Hribar, is commemorated in a monument next to the staircase.

There are four exhibition spaces in the town hall, including the Glass Atrium, the Central Atrium, the Right Atrium, and the Historical Atrium. Exhibitions are organized by the city and include local and international art exhibitions.
Image Courtesy of Wikimedia and Ziga.
4

The Kresija Palace (Slovene: Kresijska Palaca) is found in the central part of Ljubljana, on the bank of the Ljubljanica River near the Triple Bridge. Noted for its blend of Neo-Baroque and Neo-Rococo styles, the building was completed after the Ljubljana earthquake of 1895 to house the Ljubljana district bureaucracy of the then Duchy of Carniola. The name of the palace derives from the old Slovenian word "kresija", used as a common colloquial name for the Austrian districts, known as Kreise in German ("okraji" in standard Slovene). It was commissioned by Mayor Ivan Hribar as part of the larger plan of urban renovation of Ljubljana.
Image Courtesy of Wikimedia and Ziga.
Sight description based on Wikipedia.
5

St. Florian's Church is a Roman Catholic church in Ljubljana. It was built in 1267 by an unknown Roman Catholic Bishop. The church was destroyed in a fire in 1774, but was rebuilt shortly afterwards. Throughout its history, the building has changed many appearances, the last of which was given by architect Joze Plecnik in 1934. A statue of St. John of Nepomuk was also added back then.
Image Courtesy of Wikimedia and Ajznponar.
6

St. Jacob's Church in Ljubljana is a Baroque-style church built between 1613 and 1615 on the site of an older Gothic church, erected in the early 15th century by the Augustinian Order. In 1598, the old church was acquired by the Jesuits and thus became the first Jesuit church in the Slovene lands, and one of the first in Inner Austria. Its interior was designed by Italian architect Francesco Robba and Slovene painter Luka Mislej. After the Ljubljana earthquake of 1895, the church was renovated by the Linz-based architect Raimund Jeblinger and the interiors were redone by Janez Šubic. Nevertheless, much of the original Baroque construction has remained intact.
Image Courtesy of Wikimedia and Ziga.
Sight description based on Wikipedia.
7

The Church of Our Lady of Mercy was rebuilt in 1714 and 1715, after being nearly completely destroyed. The rebuilt version was designed in a Baroque style by Venetian architect Domenico Rossi, to honor the local tradition. The main altar features the copy of a Madonna painting, made by Master Rothmayerja, the original of which was destroyed by fire in 1857.
Image Courtesy of Wikimedia and Ziga.
8

8) National and University Library of Slovenia

The library building is the most monumental of Plečnik's works. The central staircase which leads to a reading room, set between colonnades of dark stone, is characteristic to his design style. Contrasted with this is the powerful, expressive street façade, which is representative of Plecnik's most "eccentric mannerist style"
Image Courtesy of Flickr and Filip Maljković.
Sight description based on Wikipedia.
9

Slovenska Matica, also known as Matica Slovenska, is the second-oldest publishing house in Slovenia, established in the 19th century as an institution for the scholarly and cultural progress of Slovenes. The name is literally translated into English as the "Slovene Queen Bee," which is a metaphor meaning "the parent body of the Slovenes." It should not be confused with Matica Slovenská, the analogous institution in Slovakia.

Slovenska Matica reached its peak at the beginning of the 20th century. At that time, it functioned as a regular publishing house in a free market, publishing books for the general public, many of which became bestsellers; at the same time, it also performed the role of an Academy of Sciences, fostering high culture and maintaining close contacts with the Yugoslav Academy of Sciences and Arts in Zagreb, the Serbian Academy of Sciences and Arts in Belgrade, as well as similar institutions in Prague, Krakow, London and St Petersburg.
Image Courtesy of Wikimedia and Ziga.
Sight description based on Wikipedia.
11

The Ursuline Church of the Holy Trinity is a Baroque-style church built between 1718 and 1726. It was designed by Carlo Martinuzzi, a Friulian architect, and is noted for its extensive altar made of African marble, designed by Francesco Robba, who also built the Fountain of the Three Rivers of Carniola, which stands in Town Square in Ljubljana. The original bell tower was destroyed in the Ljubljana earthquake of 1895. The current replica was built in the 1900s.
Image Courtesy of Flickr and domjisch.
Sight description based on Wikipedia.
12

Located between the Slovenian Parliament, the National Museum and the National Gallery is the Ljubljana Opera House - previously the home of the Provincial Theater, built between 1890 and 1892 in Neo-Renaissance style by Czech architects Jan V. Hrasky and Anton Hruby. The facade of the Opera House has Ionic columns, supporting a tympanum above the entrance, and two niches at the sides, adorned with Alojzij Gangl's allegorical statues of Tragedy and Comedy.

Prior to the construction of the German Theater (the present Drama Theater) in 1911, it held productions in both Slovenian and German; afterwards, only in Slovenian.
Image Courtesy of Wikimedia and Ziga.
Sight description based on Wikipedia.