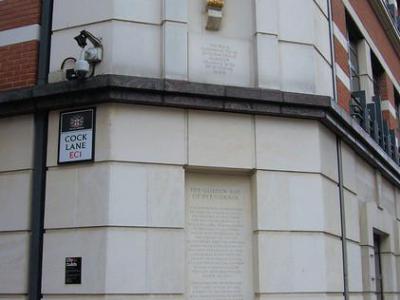 This small street in the City of London takes its name probably from having been a breeding ground for cocks – cock fighting was a highly popular sport in the 17th-18th centuries.

Prior to that, in the Middle Ages, the street was known as Cokkes Lane and was the site of legal brothels. In 1762, 25 Cock Lane was the site of one of the great faked supernatural manifestations, now known as the "Cock Lane Ghost" and used generically for the ghost stories without basis in fact. Charles Dickens is one of several Victorian authors who alluded to the Cock Lane Ghost story in several of his books.

Fascinated with ghosts as he was, most likely due to his childhood nursemaid Mary Weller, Dickens made reference to the ghost in "Nicholas Nickleby" as Mrs. Nickleby, one of the novel's lead characters and a source of much of its comic relief, claims that her great-grandfather "went to school with the Cock-lane Ghost" and that she knew "the master of his school was a Dissenter, and that would in a great measure account for the Cock-lane Ghost's behaving in such an improper manner to the clergyman when he grew up." Dickens also briefly mentions the ghost in "Dombey and Son" and "A Tale of Two Cities", where Jerry Cruncher of Tellson's Bank moonlights as a body snatcher.

In addition to the ghost, another of the lane’s claims to fame was that the Great Fire of London of 1666 finally halted at the intersection of Cock Lane and Giltspur Street, once known as Pye Corner, now commemorated by the Golden Boy of Pye Corner.
Image by Jim Linwood on Flickr under Creative Commons License.