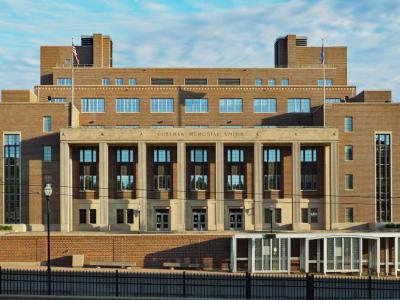 Coffman Memorial Union (commonly known as Coffman Union or simply Coffman) is a student union on the East Bank campus of the University of Minnesota in Minneapolis. Situated near the Mississippi River, Coffman anchors the south end of Northrop Mall, a grassy area at the center of campus.

Coffman Memorial Union was built between 1939 and 1940 as a new "center of social life" for the University of Minnesota campus, a role that had previously been filled by Shevlin Hall and Nicholson Hall in the Old Campus Historic District. Designed by architect Clarence H. Johnston Jr, the new building opened in September 1940 and was dedicated on October 25th of the same year. It was named in memory of Lotus D. Coffman, President of the University of Minnesota between 1920 and 1938.

The building hosts a variety of services including the University of Minnesota Bookstore, Minnesota Marketplace Food Court, US Postal Service, IT Student Lab, administration services, and student group services. While the main lounge and theater are located on the main floor of the building, the lower level offers access to the bookstore, Great Hall, and several dining options. The basement features the Whole Music Club and an entertainment center called Goldy's Gameroom (which also features a bowling alley).

The building's upper floors are largely reserved for student and administration use, with student groups occupying much of the second floor. The fourth floor is home to the Campus Club, a member-based dining and event venue primarily used by faculty and alumni.
Image Courtesy of Wikimedia and McGhiever.
Sight description based on Wikipedia.