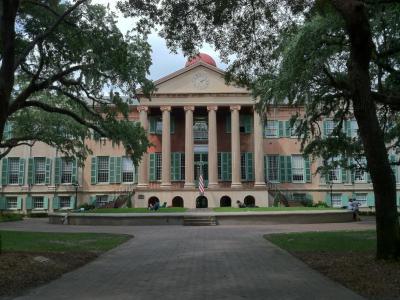 The College of Charleston is a public liberal arts college in Charleston, South Carolina. Founded in 1770 it is the oldest college in South Carolina, the 13th oldest institution of higher learning in the United States, and the oldest municipal college in the country. The founders of the college include three future signers of the Declaration of Independence (Edward Rutledge, Arthur Middleton, and Thomas Heyward) and three future signers of the United States Constitution (John Rutledge, Charles Pinckney, and Charles Cotesworth Pinckney).

Due to the historic look and beauty of the campus, many movies and television shows have been filmed at the College of Charleston, including General Hospital, North and South, The View, Cold Mountain, The Patriot, White Squall, Wife Swap, O, The Notebook, Dear John, and Mandie. The most popular scene location is Randolph Hall. Built in 1828–29, Randolph Hall is one of the oldest college buildings still in use in the United States. The building has been designated as a National Historic Landmark.
Image Courtesy of Wikimedia and Lkeadle.
Sight description based on Wikipedia.