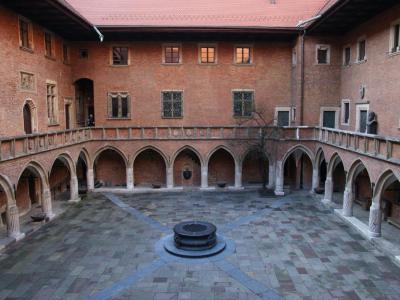 The Collegium Maius (Latin for "Great College") is the first building in Poland that was used by a university. Located on Jagiellon Street, the building was gifted by King Wladyslaw II to the Jagiellonian University in 1400. By the end of the 15th century, the University had become popular and attracted students from all over Europe. Nearby buildings were added to the University and a courtyard was built while adding touches of Neo-Gothic architecture to the main building in 1517. By then, the University had seen some famous students like Copernicus, the Renaissance astronomer and polymath who would revolutionize European ideas about the universe.

Classes were conducted on the ground floor while the faculty occupied the higher floors as their residence. As the infrastructure grew, the Collegium Maius went on to become the first house of the University library. Today, the building is home to the Jagiellonian University Museum and exhibits the University's rich collection. Here, you can expect to see lecture rooms, communal halls, professors’ quarters, a library and a treasury containing rectors' Gothic maces and the Jagiellonian globe. Exhibits also include medieval scientific instruments, globes, paintings, collectibles, furniture, coins and medals.

Along with temporary exhibitions, the building also hosts an interactive educational show titled ‘The World of Senses’ which must not be missed. It elaborates the power of human understanding and you are sure to feel enlightened after watching the show.

Why You Should Visit:
It's free to look at the beautiful and ancient courtyard, but it's also well worth paying to take the English guided tour to see inside.

Tip:
Try and time your visit to be in the courtyard at an hour of the day between 9am and 5pm when the bell strikes the hour. There is a musical box effect with figures moving and music played, similar to other clocks in Munich and Prague.