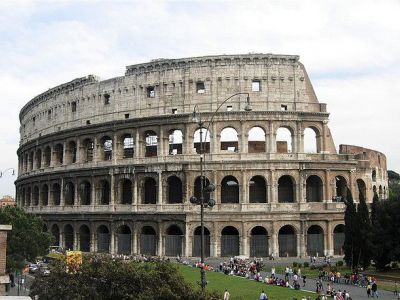 The Colosseum is one of the grandest monuments to have stood the test of time and probably the most visited ruins in the world. The works on this colossal structure began in 72 AD and took 8 years to complete. The official opening of the venue was marked with gladiator games that lasted 100 days.

The Colosseum amphitheater comprised four tiers that could hold up to 50,000 spectators. The lowest tier was for the emperor and the royal family; the two middle ones were for Roman citizens and members of government, while the highest tier was for the plebs. Below-ground passages were used for bringing men and animals into the arena that was separated from the audience by a ditch. The amphitheater mainly hosted three types of shows: wild animal fights, public executions and, of course, gladiator battles. Spectacles at the Colosseum could last for days. Admission was free and the main sponsor was the Emperor himself. Despite popular belief that the early Christians were martyred here in numbers, records reveal that it was very unlikely so.

At some point, during the 18th century, the Colosseum served as a fortress and then simply became a stone quarry for other construction projects. Passers-by habitually chipped off pieces of the Colosseum for souvenirs which, together with some natural causes like earthquakes, led to its partial destruction. Today, only the north side of the building remains, as well as the underground passages. The arena floor is totally gone, and it is possible to access the subterranean part of the Colosseum, as well as its 3rd floor, on pre-booked tours only. The floors open to visitors without a special ticket, are the ground and first floors. On the other hand, the Colosseum ticket also allows entry to the neighboring Roman Forum and Palatine Hill, so it's probably the best option for those visitors not pressed for time.

Inside the Colosseum, there's a historical exhibition with both permanent and changing displays. Exploring in and outside the Colosseum may take a whole day. Those who arrive in time for the opening may stand a pretty good chance of having the whole place to themselves, as it's not so crowded in the early hours.

Why You Should Visit:
There is so much more to this magnificent sight than meets the eye... It is great to see and try to imagine what happened there in years gone by.

Tip:
Go early in the morning or late in the evening, as the queues are crazy in the middle of the day and it's usually too hot to be standing around anyway.
If you can't make it early but want to avoid the queues, then pay a little extra and take a guided tour – it will also get you in the Forum area.
Tickets can also be bought in advance (plenty options available) or at the Roman Forum (queues are much shorter there).
It's worth getting the audio guide to get more information about the layout and what happened where.