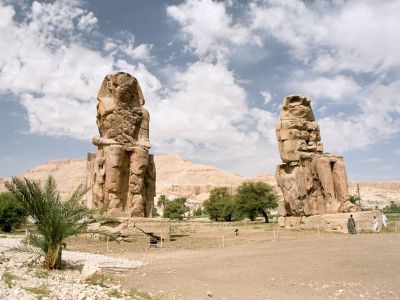 Colossi of Memnon, Luxor (must see)

The Colossi of Memnon are two giant stone statues located in the Necropolis of Thebes, near the city of Luxor. The immense statues have been dated to around 1350 B.C and are likenesses of Pharaoh Amenhotep III. The 18 meter twin sculptures show the pharaoh seated with his hands in his lap looking out over the Nile River. Carved beside his legs are two smaller images of his mother, Mutemwiya and his wife, Tiye. At the side of the colossi are carved impressions of the Nile god, Hapy. Originally the statues lay at the entrance to Amenhotep’s mortuary temple around which a hugely popular cult worshipped the pharaoh as a living god. Unfortunately, little remains of the opulent temple complex due to flooding of the Nile undermining the foundations and inundating the constructions over the millennia.

The colossi themselves have taken a beating over time, but they are still very impressive constructions. Made from quartzite sandstone, it is thought that the stone was quarried 675 km away at el-Gabal el-Ahmar and transported by land as the stone would have been too heavy to be sent down the river. The Greek geographer Strabo wrote in the first century A.D about an earthquake damaging the northern colossus and that following this event, the statue began to sing at dawn. Hearing the statue singing, most likely caused evaporation of dew, is said to be lucky and bring oracular powers. This feature attracted many Roman emperors to visit the colossi.
Image Courtesy of Wikimedia and Przemyslaw "Blueshade" Idzkiewicz.