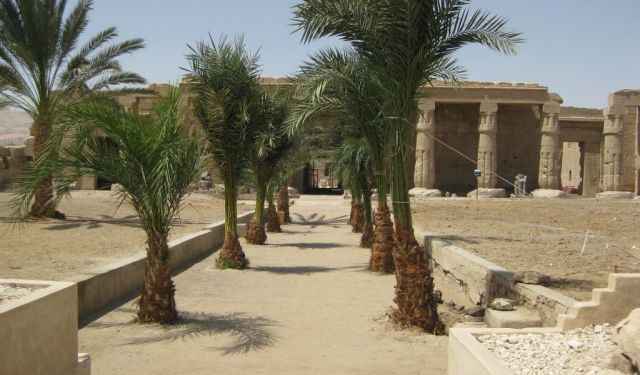 Image by S F-E-Cameron on Wikimedia under Creative Commons License.

The West Bank area of Luxor - located across the River Nile from the modern city itself - is a true archaeological paradise full of must-see sights for any visitor. There are a number of ancient Egyptian pharaoh tombs, necropolises and temples here, dating from the time of the ancient city of Thebes. Take our walking tour to see all the best sights in the area.
How it works: Download the app "GPSmyCity: Walks in 1K+ Cities" from iTunes App Store or Google Play to your mobile phone or tablet. The app turns your mobile device into a personal tour guide and its built-in GPS navigation functions guide you from one tour stop to next. The app works offline, so no data plan is needed when traveling abroad.

1) Temple of Merneptah (must see)

Merneptah succeeded his father Ramses II and ruled for 10 years during the 13th Century B.C. The Temple of Merneptah is modeled on the Ramesseum and is located behind that of Amenhotep. Merneptah succeeded to the throne as an old man following the deaths of 12 brothers with stronger claims since Ramses II lived and reigned for so long that he outlived many of his heirs. Close to the entrance to the temple there is a small museum explaining the layout of the design and providing information about the artifacts excavated at the site. Just east of the Sacred Lake, you can find several jackal-headed sphinx statues that still have their original coloring. It is thought that these were taken from the nearby Temple of Amenhotep along with stone slabs.

There are some impressive statues and reliefs that have been rescued from the site and these are kept in a permanent storage shed at the site. Some of the wall decorations on display are astonishingly well preserved and still exhibit strong colors. Many of these, too, come from the Temple of Amenhotep. The renovations done at the site are controversial since rather than trying to piece together the temple, they have merely sured the slabs up in the locations where they were found.

Image by Andrew Currie on Flickr under Creative Commons License.
2

The Abd el-Qurna Necropolis is the hillside location of many of the Tombs of the Nobles. The Qurna part of the name is thought to be a derivation of the el-Qurn meaning “peak”. Other theories behind the name of the cemetery are that it was named after a local saint. It is one of the most frequently visited necropoli in Thebes thanks to a high concentration of noble tombs. There are more than 150 burial places that have been found on the hill, most of them dating to the 18th-20th dynasties.

Among the tombs that are open to the public are those of User, a scribe and royal steward under the reign of Thuthmosis I; Nahkt, which features impressive, brightly colored murals of festivals and banquets in ancient Egypt; the tomb of Menna and his wife has a typical T-shaped noble design featuring stelae that show men and women praying and murals of giving and receiving offerings. The tomb of Anen, who was the brother in law of Amenhotep III, features details relating to his role as chancellor of Lower Egypt and semi-priest of Heliopolis. Visiting the sites at the Abd el-Qurna Necropolis provides a fascinating glimpse into everyday life in the ancient Egyptian kingdoms as well as important information relating to the pharaohs and their courts.

Image by Rémih on Wikimedia under Creative Commons License.
3

3) Temple of Thuthmosis III (must see)

The Temple of Thuthmosis III honors the sixth pharaoh of the 18th dynasty under whom Egypt greatly expanded its territories. Over the course of 17 military campaigns Thuthmosis III defeated northern Syria and conquered Nubia. Despite his triumphant rule, his temple was only discovered in 1961 while restoration work was carried out in between the temples of Hatshepsut and Mentuhotep II. It is a small temple and construction probably began in the 43rd year of his reign under his vizier Rekhmire and was most likely completed under the reign of Amenhotep II. Construction of the temple coincided with the campaign of destruction led by Thuthmosis III against the memory of his step-mother Hatshepsut.

It is thought that there was no cult dedicated to the memory of Thuthmosis III at this temple, rather it may have been built so close to that of Hatshepsut to undermine her popularity. Another temple dedicated to the worship of the cult of Thuthmosis III was built elsewhere. Archaeologists have uncovered remarkable multi-colored bas reliefs at the site, some of which are now seen in the Luxor Museum. Much of the temple was destroyed by rock falls from nearby hills, but a visit to the site is still worthwhile when combined with a visit to the Temple of Hatshepsut.

Image by Chipdawes on Wikimedia under Creative Commons License.
4

The El-Assasif Necropolis contains tombs and burials from the 18th, 25th and 26th dynasties of ancient Egypt. One of the biggest tombs in the cemetery is that of Mentuemhat who was an official and fourth prophet of Amun in Thebes during the 25th dynasty. There are many statues of Mentuemhat in museums around the world as well as others still extant in his tomb. Pediamenopet, chief librarian and archivist to several pharaohs during the 25th and 26th dynasties also has his tomb at El-Assasif. He was obviously deemed to be very important as his tomb is very large – containing 22 rooms that are connected by long corridors and shafts. There are three levels to the tomb and it extends down 20 meters under the earth.

Another interesting tomb to visit, while investigating El-Assasif Necropolis, is that of Harwa, who was a noble, holding the illustrious position of Great Steward of the Divine Votaress during the 7th Century B.C. This important role meant that he had control of the affairs and finances of the great Temple of Karnak, dedicated to Amun. Information gleaned from the tomb indicates that Harwa may also have ruled southern Egypt on behalf of 25th dynasty pharaohs.
Image by Rémih on Wikimedia under Creative Commons License.
5

Situated between the El-Asassif Necropolis and Sheikh Abd el-Qurna, the El-Khokha Necropolis contains a number of tombs from the 18th and 19th dynasties. The tombs were investigated by German, British, Belgian and Egyptian expeditions. A particular historical highlight of this site is the unique tomb of Amenemhat, one of the largest and most significant private tombs of the New Kingdom.
Image by Rémih on Wikimedia under Creative Commons License.
6

6) Tombs of Roy and Shu Roy

The tombs of Roy and Shu Roy are valuable to archaeologists as they depict life in the nobility and artisanal classes of ancient Egypt. The Tomb of Roy is the resting place for an 18th dynasty royal scribe who also acted as steward for the estates of Haremhab. This small tomb reveals startlingly detailed and colorful murals depicting all aspects of life at the time. Some of the notable scenes show harvest time and funeral processions. A theory espouses that the Tomb of Roy may have been prepared in advance by entrepreneurial souls and sold as a generic tomb that was later embellished with details of the person’s life.

The Tomb of Shu Roy follows a standard T-shaped plan and in certain sections there are startlingly well-preserved reliefs. Some of the wall paintings feature colorful geometric designs and others show scenes from daily life and Shu Roy and his wife praying. It is known that Shu Roy was “Brazier Carrier of Amun” and his wife was “Chantress of Amun” during Ramesside Times, but beyond that nothing concrete is known of them. The lack of information surrounding Shu Roy and his wife is precisely what makes visiting the tomb tantalizing – you may just find a clue in the hieroglyphics that could unlock their past lives.
Image by kairoinfo4u: Horus on Wikimedia under Creative Commons License.
7

Situated to the north of the Theban necropolis area, El-Tarif contains tombs of the 11th Dynasty kings. It also houses tombs from the First Intermediate Period, Second Intermediate Period and early Middle Kingdom eras. Based in low mounds with carved entrances, these tombs are fascinating places to visit.
Image by David Liam Moran on Wikimedia under Creative Commons License.
8

The Temple of Seti I was begun at the end of the pharaoh’s reign and is thought to have been completed by his son, Ramses II. It was dedicated to Ramses I, father of Seti I, who ruled for just two years, a period too short to have developed his own mortuary temple. Seti I was a powerful pharaoh and ruled the Upper and Lower Kingdoms of ancient Egypt efficiently. He was the second pharaoh of the 19th dynasty and his reign is thought to have extended from 1290 to 1279 B.C. Seti was the founder of the Valley of Queens and his mother was the first to be buried there.

Many of the ceilings and walls are in good condition, which provides the visitor with a good idea of how it must have appeared when recently constructed. At the site there are two engraved stelae, which depict visits to the temple by Seti I and Ramses II. At the entrance portico of the temple there are nine of the 10 remaining engraved pillars. You continue through to the Hypostyle Hall where there are many rooms and sanctuaries leading off it. In the Royal Rooms there are carvings that depict important events in the reign of both Seti I and Ramses I.
Image by Zanaq on Wikimedia under Creative Commons License.