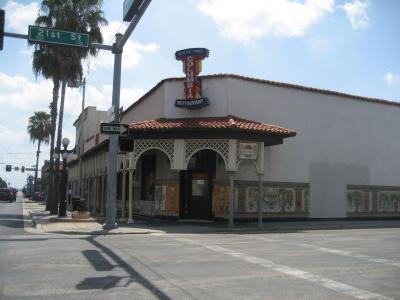 After walking the Ybor City Historic District, you may be working up an appetite. If that's the case, there's no better option than stopping by the historic Columbia Restaurant. Columbia is a Florida chain, with branches in Tampa, Sarasota, Orlando, Clearwater, and St. Augustine. But the Ybor City is the original restaurant, in constant operation since 1905. It is Florida's oldest restaurant.

Columbia has been honored as one of American's most historic restaurants and one of Florida's best. Southern Living Magazine even named it one of their favorite romantic restaurants. It goes without saying, but the food is spectacular. You'll find a host of classic Spanish and Cuban dishes. Their tapas, salads, and Cuban sandwiches are high on everyone's lists.

The Hernandez Gonzmart family opened the restaurant, and the operation has stayed in the family ever since. The recipes haven't changed much, but instead of cigar workers just off from the factory, the restaurant now serves celebrities, local regulars, and tourists. The building has grown from a small 60-seat counter to a world-class restaurant.

For the full experience, make sure you plan to arrive for one of their dinner shows featuring Flamenco dancers. The shows are on Friday and Saturday nights at 7:00 and 9:00 p.m. The restaurant is open 365 days a year, and reservations are always recommended.
Image Courtesy of Wikimedia and Infrogmation of New Orleans.