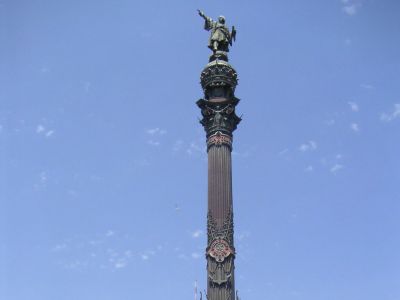 The Columbus Monument is a 60m monument to Christopher Columbus found at the lower end of Rambla street in Barcelona. It commemorates Columbus's reporting to King Ferdinand and Queen Isabella upon his return to Spain from the first American expedition.

The monument was built in 1888 for the International World's Fair held in Barcelona that year. The bronze statue of Columbus, crowning the monument, was sculpted by Rafael Atche. Originally, the statue was intended to point westward in the direction of the New World, but instead, it points east, reportedly, towards Columbus's home town of Genoa in Italy. Underneath the statue, there is an inscription reading: "Tierra" (land). Down below are the series of sculpted images of the people related to Columbus, important scenes from his voyage to the Americas, the places he visited, as well as the scene of him meeting King Ferdinand and Queen Isabella in Spain.

Tip:
Take the time to go around the monument which has four groups of sculptures at the base, as well as a wine bar and a store selling some great souvenirs/gifts that aren't as mass-produced as what you'll find at the street vendors.
You can then take an elevator to the viewing platform from which you can enjoy a sweeping view of the area. For that, you must pay an admission fee.