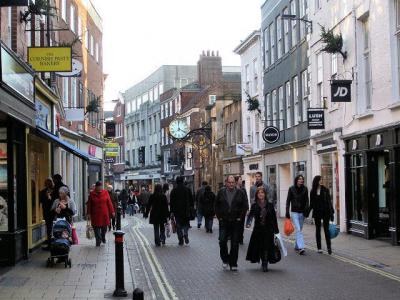 Coney Street is a major shopping street in the city centre of York, in England. The street runs north-west from the junction of Spurriergate and Market Street, to St Helen's Square. The street was first established in the Roman Eboracum period, running parallel to and outside the city's south-western wall. At the time, the city's bridge over the River Ouse lay at its northern end. Excavations have located remains of a 1st-century grain warehouse on the south-west side of the street.

The street was first recorded in about 1150, as "Cuningstrete", the King's Street. The use of "street" rather than "gate" suggests that the name dates from the Anglian period, and two coin hoards from the period were found in the 1760s.

In 1308, Coney Street was described as the most important street in York. In 1335, a row of houses were built in the churchyard of St Martin; almost entirely rebuilt on several occasions, the last remains survived until 1958. In 1396, the Gild of St Christopher Maison Dieu almshouse was constructed on the street, and in 1459, York Guildhall was built next to it, at the northern end of the street. York Mansion House was built in front of it in 1725, and in 1782 the area in front of it was cleared to create St Helen's Square.

During the 19th-century, the street became lined with shops, noted businesses including the House of Bewlay tobacconist, Burgin's perfumery, and the Leak & Thorp department store. During the 20th-century, an increasing number of the shops were taken over by national chains. Despite the closure of several shops in the 2010s, the street remains home to a mix of High Street shops and cafes, while numerous buskers perform throughout the day.
Image Courtesy of Wikimedia and Keith Laverack / Coney Street York / CC BY-SA 2.0.
Sight description based on Wikipedia.