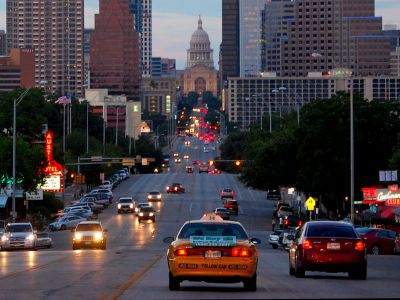 Congress Avenue is a major thoroughfare in Austin, Texas. The street is a six-lane, tree-lined avenue that cuts through the middle of the city from far south and goes over Lady Bird Lake leading to the Texas State Capitol in the heart of Downtown. The avenue was designed by the first mayor of Austin, Edwin Waller.

Early structures along Congress Avenue included government buildings, hotels, saloons, retail stores and restaurants. By the late 1840s "The Avenue" formed a well-established business district. The mid-1870s introduced gaslight illumination and mule-driven streetcars, as well as construction of a new Travis County courthouse at Eleventh Street. The present Texas Capitol at the north end of Congress Avenue was built in 1888. The original dirt street was bricked in 1910. Trolley cars operated on the avenue until 1940.

Before Interstate 35 was completed in the 1960s, Congress Avenue was the primary road to reach Austin from the south. Certain landmarks, such as the Austin Motel, identify the road as a major thoroughfare for travelers through the mid-20th century.

Congress Avenue south of Lady Bird Lake is known as South Congress, often abbreviated to SoCo, and is an increasingly popular shopping and rental district. It passes the historic Travis Heights neighborhood, the Texas School for the Deaf, and St. Edward's University as it extends south out of town.

In recognition of its architectural and historical significance, Congress Avenue from Cesar Chavez Street (formerly First Street) to the Capitol was listed in the National Register of Historic Places in 1979. The Capitol forms a terminating vista at the north end of Congress; this view became one of the Capitol View Corridors protected under state and local law from obstruction by tall buildings in 1983.

Why You Should Visit:
A must-stroll for visitors and a popular hangout for locals. South Congress oozes homespun character and boasts the story of Austin’s yesteryear in its boutiques, eateries, galleries and music venues.
Image by LoneStarMike on Wikimedia under Creative Commons License.
Sight description based on wikipedia