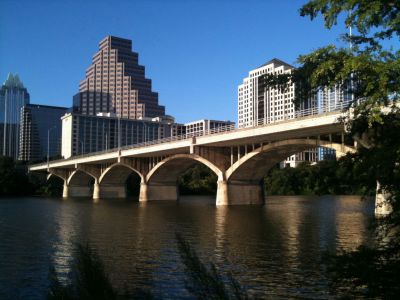 The Ann W. Richards Congress Avenue Bridge (formerly known simply as the Congress Avenue Bridge) crosses over Lady Bird Lake in Austin, Texas. Before construction of the Longhorn Dam was completed in 1960, the bridge crossed the Colorado River from which Lady Bird Lake is impounded. The bridge was known as the Congress Avenue Bridge from the construction of the first span across the Colorado River at that location in the late 19th century until November 16, 2006, when the Austin City Council renamed the current bridge in honor of Ann W. Richards, the 45th Governor of Texas and a long-term resident of Austin. The bridge is a concrete arch structure with three southbound and three northbound vehicle lanes and sidewalks on both sides of it.

Ann W. Richards Congress Avenue Bridge is home to the world's largest urban bat colony, which is composed of Mexican free-tailed bats. The bats reside beneath the road deck in gaps between the concrete component structures. They are migratory, spending their summers in Austin and the winters in Mexico.

The nightly emergence of the bats from underneath the bridge at dusk, and their flight across Lady Bird Lake primarily to the east, to feed themselves, attract as many as 100,000 tourists annually. Tourists can see the bats from the bridge, from the sides of the river and from boats.

The Austin Ice Bats minor-league hockey team was named after the bridge's bats.

The song "Bats" by Kimya Dawson and rapper Aesop Rock was inspired by the immense number of bats that reside under the bridge.[
Image by Stuart Seeger on Wikimedia under Creative Commons License.
Sight description based on wikipedia