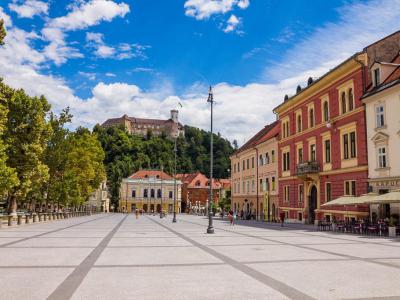 The square has been the site of several historical events. Leaders announced independence from Austria-Hungarian rule on October 29, 1918. This announcement created the State of Slovenes, Croats, and Serbs. Yugoslav Communist leader Josip Tito made a speech facing the square in 1945.

A demonstration in the square in June 1988 led to Slovenia's independence in 1991. U.S. President Bill Clinton visited Congress Square in 1999.

Several renditions of a statue dedicated to Austrian field marshal Joseph Radetzky have stood in the square. The statue now stands in the National Museum.

Slovene architect Joze Plecnik renovated the square in the 1930s. He added a memorial to women who protested against the imprisonment of Slovene patriots. An anchor was placed in the square in 1954 to celebrate Slovenian unification. Several other landmarks stand in the square. Visitors will find a fountain designed by Boris Kobe, a replica of a Roman monument found in nearby ruins, and an 1830s bandstand.
Image Courtesy of Wikimedia and Med Cruise Guide.