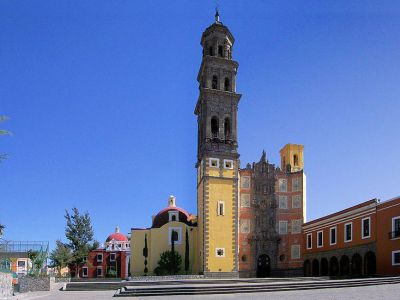 The history of Puebla is closely linked to the first religious orders established in New Spain. The first of the convents to appear in the city was that of the Franciscan Friars Minor, dedicated to the Five Wounds of Saint Francis, who arrived in 1531. By 1535 they had established a permanent settlement on the side of the royal road to Veracruz, which is now the oldest part of the city, thence known as the Convento de San Francisco. The construction was finished in 1555.

Brother Toribio de Benavente, who took active part in the foundation of the city, laid the first stone of the monastic temple, which was completed in 1585. Both, the monastery and the temple continued to be decorated and embellished until 1767, with several periods of inactivity, up to 10 years, prompted by lack of funds. The quarry rock used in the construction was taken from the nearby hill of San Cristóbal.
The temple has a single nave reinforced with square buttresses and a parapet that finishes off the upper floor. Its Churrigueresque-style façade, made of quarry rock, combined with splendid red brick and painted Talavera tiles, was built between 1743 and 1767 by Spanish architect José Buitrago.

The façade is splayed; its three walls carry 14 large tiled panels featuring vases with flowers and two smaller ones featuring God the Father and the Virgin Conqueror. The interior is highlighted by the Neo-classical-style altar, which was skillfully designed by famous architect Don José Manzo Jaramillo.

Inside one of the temple's chapels is interred the incorrupt body of Blessed Brother Sebastián de Aparicio.

The convent's tower, 63 meters high, is made up of pillared structures with two bells on each side. Its construction was begun in 1730 by Father Tapia, who left it at the height of the cornice, and was continued by the Dominican Father José Antonio, who fitted the bells and finished it in 1767.
Image Courtesy of Wikimedia and Ramon Leon Rosas.