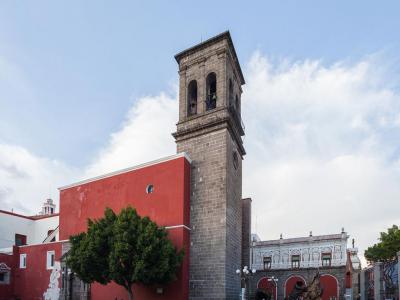 The convent is arguably best known for the Chapel of the Rosario, which was once considered the Eighth Wonder of the World. It is also known as one of the greatest religious art displays in Mexico. The Chapel was added to the church in 1650. It is full of symbolism, where each element represents something related to the Catholicism and Dominican Order beliefs.

The interior of the Chapel is fully covered in reliefs made of golden stucco. The Baroque decorations are covered in 24-carat gold leaves. The dome, which rises above the altar, shows 60 angels circling the main vault.

The dome is divided into sections, representing the Seven Gifts of the Holy Spirit: Divine Grace, Understanding, Fortitude, Piety, Fear of God, Knowledge, Counsel, and Wisdom. The dome also displays sixteen saints and the three theological virtues of Faith, Hope, and Charity.

Among many paintings in the chapel are those in the nave and the apse. The nave walls are adorned with canvases in the Chiaroscuro painting style, created by the artist Jose Rodriguez Carnero. The apse has a large painting that is dedicated to the Holy Rosary, a set of prayers used in the Catholic Church. The Virgin Mary appears in this painting, covered with roses.

St. Domingo Convent was added to the UNESCO World Heritage List in 1987. Visitors are welcome to explore the church and chapel during open hours. Mass is held twice daily.
Image Courtesy of Wikimedia and Diego Delso.